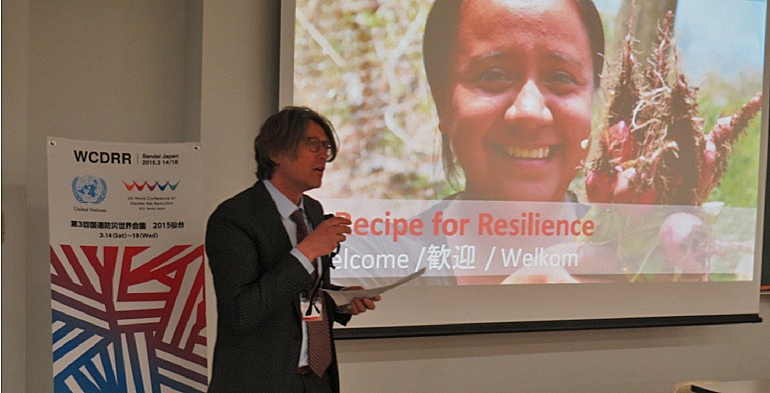 “We are here in Sendai as Partners for Resilience, because we want to scale up our programme on community-based disaster risk reduction combined with climate adaptation and using ecosystems”, Juriaan Lahr (top photo), head of international assistance of the Netherlands Red Cross said at the special workshop of the UN World conference on disaster risk reduction in Sendai, Japan on 15 March.

The Netherlands Red Cross is part of this alliance that has been working to reduce the impact of natural hazards on vulnerable people in nine countries since 2011.

According to Lahr this new Dutch approach has now successfully been applied in 500 communities. “Our integrated approach can contribute to this new post-2015 framework that is being discussed here. For us it is crucial that governments recognize communities play a central role in DRR-planning”.

Villages making their own choices
At dthe workshop several cases were discussed where the approach has been introduced and communities developed a DRR-plan themselves. Not about working with a predefined project but about facilitating a village to make their own choices.

“It is about getting the fabric right”, Ritesh Kumar of Wetlands South East Asia said. ”We looked at flood preparedness as an ability to respond. This encouraged us to take a closer look at the hydrological situation in and around the villages. Often the problems are caused by rivers silting up. This led to the clustering of upstream and downstream communities struggling with the same flood problems”. 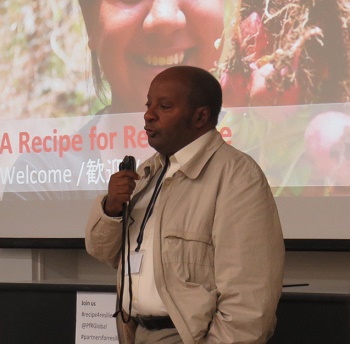 Sileshi Zewdie of Care tells about the importance of rain prediction for Ethiopian farmers.

Facilitating with reliable weather forecasts
Sileshi Zewdie of the alliance partner Care in Ethiopia told about making a community more resilient against drought. “In Ethiopia many farmers are cattle breeders. During a serious drought there is not enough food for their animals so they sell them. To be able to make a good price it is important to have good drought forecasts.”

,Zewdie also told that farmers are forced to diversify their business and start producing food. “Serious droughts used to occur every seven years, that has increased to every two or three years. As they have to sell their cattle more often they have to find another way to earn their money. Given the possibility of a nearby river, some developed an irrigtion scheme to produce crops".

The alliance contributes to the resilience of communities by integrating climate change adaptation (CCA) and ecosystem management and restoration (EMR) into DRR.

With this integrated approach, communities can strengthen their capacities to reduce the impact of disasters.

See for more background information on the side event:
Partners for Resilience: practical experiences from an integrated approach towards disaster risk reduction