Water technology supplier BWA featured its short for liquid gas contact system Galicos for the first time in the USA during the Weftec 2016 trade fair in New Orleans.

BWA is one of the participating exhibitors in the Netherlands pavilion. Director Coos Wessels pitched his new low-maintenance technology at the pavilion on 27 September (on top photo).

Wessels was provided the opportunity to pitch his new technology as it was one of the outstanding Dutch water technologies highlighted at the ‘Holland innovation & inspiration hotspot’. At large, international trade shows this ‘hotspot’ is presented by the public-private partnership Water Alliance. 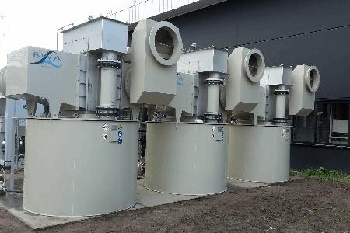 Zero liquid disharge
In his pitch Coos Wessels explained that Galicos is an ideal solution for ‘zero liquid discharge’ applications as it brings concentrated (brine) streams to the point of saturation, so that, after a controlled cooling in a side stream, crystals can be separated.

Wessels told that his company has a strong believe in innovative technology. “Our philosophy is to think and act differently to solve the problems we are facing. With our Galicos technology we prove that better, more efficient and more cost efficient go hand in hand very well.”

Minimum energy input
Galicos - short for gas-liquid contact system - brings gasses and liquids in a very efficient and intensive manner in contact with each other.

The unique features of the technology are that this is achieved with a minimum of energy input and in a way that the equipment does not get contaminates by the medium.

Even residual energy, for instance from heating, cooling and ventilating, may be put to good use. 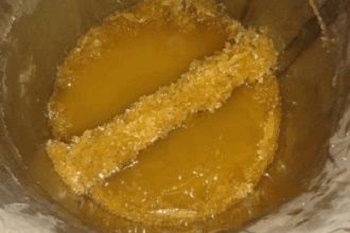 Crystals in the recirculation tank..

Gas flow
From a circulation tank, the liquid is fed to the evaporator to flow over an inclined perforated plate where it is brought into contact with an air flow.

A low negative pressure in the perforations, caused by the fast flowing liquid film, allows a small ventilator to push an enormous gas flow through the water film with only a small pressure drop.

The gas flow in the turbulent water film creates an extreme large exchange surface between the gas and the liquid. Contamination is prevented by the high degree of turbulence across the entire plate surface.

A number of full-scale Galicos installations are successful in operation.

About BWA
BWA has a strong believe in innovative technology, with waste recycling, re-use of materials and recovery of low-grade energy at the basis of all its solutions.

Through research and collaboration it seeks new ways to solve existing problems in a more sustainable and economical way.

Separation and thickening of solids and liquids are part of BWA’s core activities.
In 2015 BWA won the WssTP European Water Innovation Award 2015 for its development of finescreen technology and valorizing of cellulose removed from sewage.