Dutch-based organisation Wetlands International announced that it will contribute to reduce water scarcity by reshaping policies, investments and practices in three highly vulnerable wetlands in Kenya and Uganda.

Wetlands International made its announcement during the annual meeting of the Clinton Global Initiative (CGI) in New York, USA on 28 September during a session on climate change and resiliency.

The initiative to restore wetlands was one of the 123 new Commitments to Action of the CGI that were announced by former US president Bill Clinton and his daughter Chelsea Clinton. 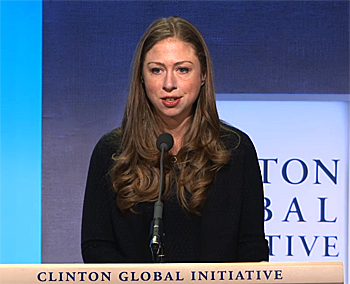 Chelsea Clinton presented the commitments on climate resiliency, including 13 initiatives on fresh water.

Ecosystem approach to combat water scarcity
With 20 percent of the world's GDP and 36 percent of the global population located in severely water stressed areas, the growing demand and competition for freshwater will be one of the biggest challenges in the world.

Wetlands International wants to demonstrate that an ecosystem approach can increase water security and community resilience.

The organisation hopes that restoration of the wetlands in Kenya and Uganda will attract interest of global leaders and will stimulate replication and scaling up of the approach elsewhere.

Reinstal wetlands
CEO Jane Madgwick of Wetlands International, spoke at the meeting on the issue of water scarcity and emphasized that wetland ecosystems are essential for storing and regulating water, and the continuing loss and degradation of wetlands is a strong driver of increasing water risks. 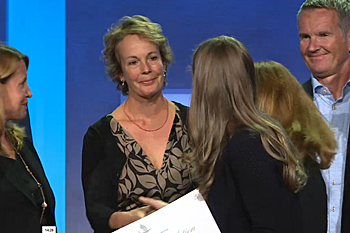 Jane Madgwick congratulated by Chelsea Clinton as one of the commitment makers.

Equitable water sharing and land sharing
In the three vulnerable African watersheds, Wetlands International intense to empower civil society to engage with governments and the private sector and stimulate informed choices for equitable water sharing, land use and infrastructure development.

Tools such as mapping wetland functions and values across watersheds and undertaking risk screening of investment plans, will be applied, as well as ensuring that vulnerable groups, such as downstream communities, and women, are given a voice.

The benefits of better watershed management will impact the lives of thousands, safeguarding water supplies and reducing disaster risks. The estimated investment of the commitment is 2.5 million US dollars.

Wetlands International is supported in this commitment by two new multi-year, multi-million strategic partnerships with the Dutch Ministry of Foreign Affairs. This includes the Partners for Resilience, led by the Netherlands Red Cross, also with the Red Cross Climate Centre, Cordaid, CARE Netherlands, and many Kenyan and Uganda partners. The other strategic partnership being WASH IT!, led by IRC, joined by SIMAVI, AKVO, and a wide range of local and regional partners.