Researchers of Graz University of Technology in Austria and Wetsus centre of water technology in the Netherlands, have managed to produce electrically charged water by means of a floating water bridge.

The water bridge is formed under the influence of a high-voltage electrical field of about 15kV. It spans about 1 cm across two Teflon beakers, each filled with deionised water.

The realisation that such water bridges can be used as electrochemical or biochemical reactors opens up a variety of possible industrial applications and water can become a 'water battery' as a storage of electric charge. 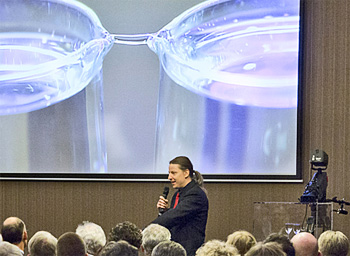 A new state next to ice, fluid and steam
Until its scientific rediscovery in 2007 at TU Graz, the 'water bridge' phenomenon, discovered in the 19th century, had sank into oblivion.

If extremely pure water, in other words water that has been distilled many times, is placed in two beakers and subject to a high voltage, the fluid moves up the side of each beaker and forms a floating water bridge between the two vessels (see top photo bridging 1 cm across two Teflon beakers).

The water in this bridge flows in both directions and is in a completely new state with its own special properties of density and structure.

Store the electric charge
A research group of TU Graz and the Wetsus research centre in the Netherlands has now demonstrated that this floating water bridge produces electrically charged water and stores the charge at least for a short time.

The water is not electronically, but rather protonically charged. This novel kind of water is either positively or negatively charged depending on whether it contains more or fewer protons. 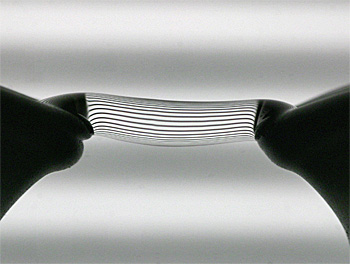 Water bridge with projected fringes to show better its behaviour.

The study shows that in anodic water – water with a positive charge – protons are formed in the context of the occurring electrolysis.

These hydrogen nuclei flow through the water bridge into the cathodic water of the other beaker, which has a negative charge, and are neutralised there by hydroxyl ions.

Since the protons move at a finite speed, there is always an excess of protons in one water container and a lack of protons in the other.

If the water bridge is suddenly switched off, the proton charges remain, as can be measured by means of impedance spectroscopy. The first investigations have shown that the fluid’s charge remains stable for one week.

Potential applications
The realisation that such water bridges can be used as electrochemical or biochemical reactors opens up a variety of possible industrial applications.

Substances can be brought into contact with other materials in the water bridge for the purpose of chemical reactions, water can become a “water battery” as a storage of electric charge, and acids and alkalis can be produced without any opposing ions – without acid and alkaline water.
This opens the way to especially eco-friendly cleaning agents, reduced waste from chemical processes, and new possibilities for medical applications.

This news item was originally published on the website of Wetsus and TU Graz.