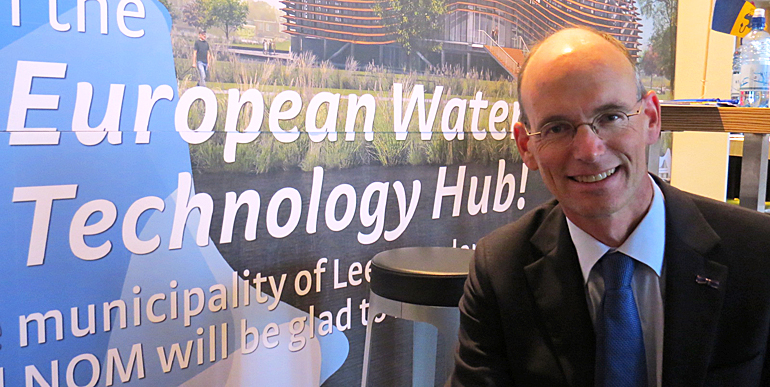 On the occasion of the annual congress of water technology centre Wetsus, scientific director Cees Buisman announced three new research topics: prevention of the spreading of antibiotics via waste water, recovery of proteins from waste water and energy generation from co2 gradients.

The annual Wetsus congress took place in Leeuwarden, the Netherlands on 6 -7 October.

One of the speakers was Director Hero Prins of European knowledge and innovation centre Climate-KIC and he brought the good news that his centre had approved Wetsus’s request to join as an affiliate partner. 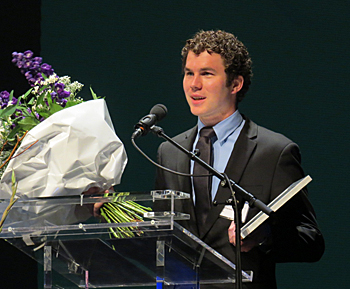 Award for research on desalination
The annual Marcel Mulder prize went to Wetsus researcher Dries Parmentier. He won the prize for his important contribution to the development of ionic liquids desalination technology.

Wetsus theme coordinator Michel Saakes won a special prize for being an inspirer as scientist and innovator.

European centre of excellent
Scientific director Cees Buisman (top photo) revealed that Wetsus will change its name as off 1 January. The new full name will be Wetsus European centre of excellence. The new name reflects the ambition of Wetsus to become the water technology hub for Europe and to support the research agenda of the European Institute of Innovation & Technology (EIT).

At the congress it was announced that Wetsus is leading initiatives for four research consortia that meet the European Union's Horizon 2020 research agenda. 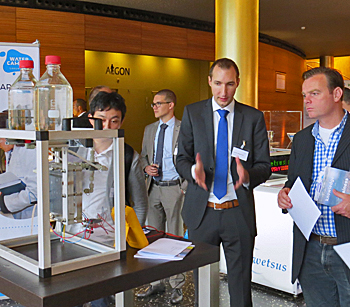 Additionally Wetsus intends to start an European research programme on this topic as well.

Buisman hopes that the agriculture sector will also join this programme as animal faeces is another mayor route for antibiotics to end up in surface water.

Recovery of proteins from waste water
Another new research topics for Wetsus is the recovery of proteins from waste water. Wetsus is testing the use of aquatic worms to produce protein-rich animal feed. Another option to explore, Buisman explained, is the use of special bacteria. A new consortium, headed by the Belgian professor Willy Verstraete of the Gent University, will be in charge of this research programme.

The third announced new research item concerns the energy recovery from chimneys and smoke stages. Gas emissions from, for instance, incinerators often contain high co2-concentrations. When emitted, there is a large difference with the co2-concentration in the air around the chimney. Wetsus wants to develop a technology to produce energy from this gradient. It already developed the 'Blue energy' technology, based on the same prinicple using the salt gradient between sea and fresh water.