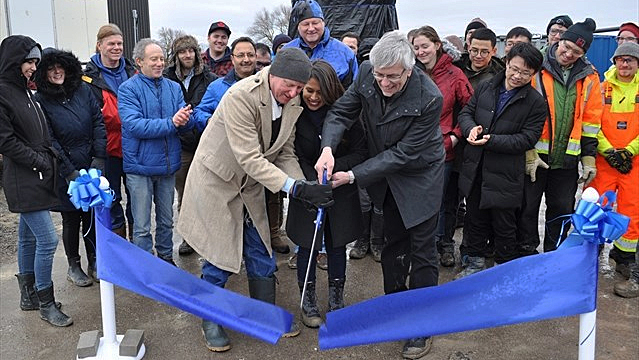 Ontario’s lake Simcoe has transformed in a field lab for ten teams of scientists to proof their technology can remove phosphorus to ultra low concentrations (10 ppb) with a very minimal footprint and at cost of less than 120 US dollar per kilogram.

On 28 February the third phase of the competition for the George Barley Water Prize officially started.

One of the teams is from Dutch water technology research institute Wetsus that entered the challenge with their NaFRAd-solution, a combination of flocculation with natural flocculants and reversible adsorption with high capacity iron based adsorbents. 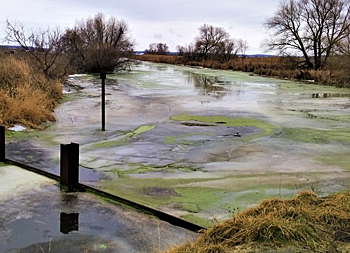 Lake Simcoe
Over the course of the next three months, the ten teams, including two from Canada, six from the United States, one from China and one from the Netherlands, will test their approaches on the surface water of Lake Simcoe.

Three containers have been placed next to the lake where the different solutions will be tested under winter conditions and fluctuating flows.

Eventually four teams will continue to the final phase of the Barley Water Prize with the opportunity to upscale their pilot installation to a daily capacity of 15.000 m3. 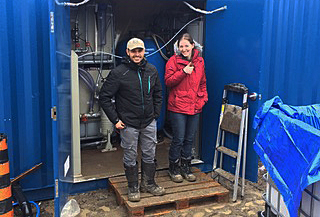 Wetsus team Prashanth Kumar (left) and Miriam Kuiper in front of the container with the NaFRAd pilot installation.

Restore natural water in Everglades
The George Barley Water Prize is organized by the Everglades Foundation in their search to find cost-effective solutions to remove and recover phosphorus from surface water. There is a high demand in Florida for such a technology, as it would make it possible to restore the natural water flow through the Everglades and prevent toxic algae blooms at the coasts of Florida.

“The solution must work in temperate climates,” explained Dr. Melodie Naja, Chief Scientist at The Everglades Foundation. “And the Ontario Ministry of Environment and Climate Change showed us that this location fits the bill perfectly.”

Naja continued: “Each of these teams is advancing the science and economics of phosphorus removal. For the winning team, the 10 million US dollar Barley Water Prize will be just a small down payment on the profits to come. That’s how serious the problem is.”

Selection of adsorbent
Wetsus scientists that conduct the test at Lake Simcoe are Prashanth Kumar, together with intern Miriam Kuiper.

Project manager Leon Korving of Wetsus expects that recovery of the phosphorus will be crucial for winning this phase. “We carefully looked at our adsorbents. There has to be a balance in costs and an effective absorbents at low concentrations. Cheap absorbents often have little absorbing capacity.”

The same goes for the flocculants. Korving: “Thirty percent of the phosphorous is attached to small particles and we developed our own biodegradable flocculant. This will be tested at our pilot, next to a commercial available flocculant.”

This news item is based on originally publications on the websites of Wetsus and the George Barley Water Prize.

Video on the third phase of the Barley Water Prize