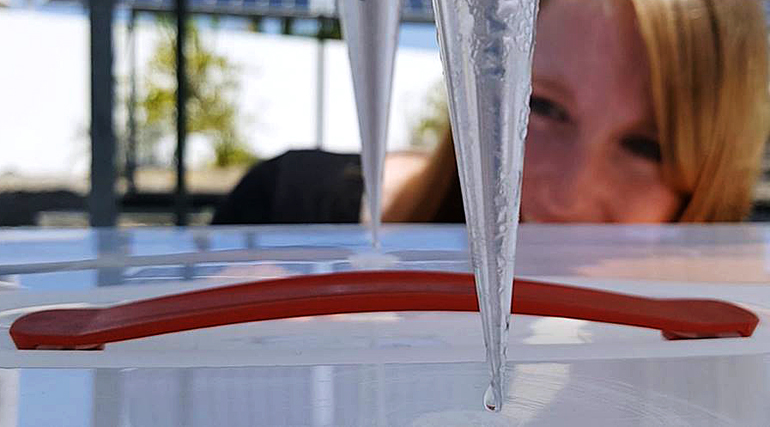 The Dutch team of Windesheim University of Applied Sciences won the first SunGlacier Challenge, a competition to harvest as much water from the air as possible.

One team with young water professionals from the Netherlands and two teams form Oman participated in the challenge and developed their own new version of the SunGlacier concept, an inverted metal cone. By cooling the cone the water in the air condensates on the cone and drips down.

The winning team had developed four SunGlacier devices, each with a different layout. The most remarkable version had a series of several cones.

The teams gathered at the Middle East Desalination Research Center (MEDRC) in Muscat, Oman from 20 till 25 March where they entered on a 48 hours run. 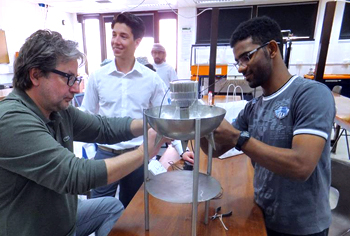 Inventor of the SunGlacier-concept, Ap Verheggen (left) giving last minute advice to one of the teams.

Great achievement
Creator of the SunGlacier concept, Ap Verheggen, reacted very enthusiastic on the version of the winning team. ‘The device with some cones in series was great. Some teachers in The Netherlands told the team not to do so, because it wouldn’t work. They did and it worked. That is a great achievement and out-of-the-box thinking!‘ said Verheggen,

During the research at the Windesheim university in Zwolle, the Netherlands, the team used heat cameras to improve the cool elements in the device. The team tested the devices several times in the Climate Chamber at the university.

The two other teams from Oman build nice and working devices as well. One had a great idea to make a spiral inside the cone to enlarge the surface for cooling, which worked good as well. 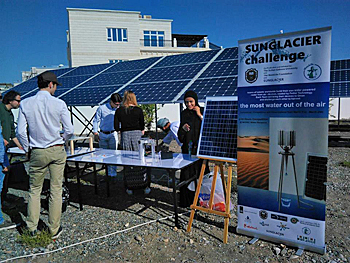 First drops within few minutes
During the preparations of the 48 hrs run in Oman, the teams could improve their devices, getting new ideas from the supervisors Ahmed Al- Busaidi (MEDRC), Ap Verheggen (inventor of Sunglacier) and Marcel Rompelman (lecturer at Van Hall/Larenstein university and Wetskills supervisor).

After a day of tweaking, changing a bit and trial and error, all three devices were ready.

On World Water Day at 8.30 sharp the three teams switched on the cooling of their devices and a few minutes later the first drops of water appeared.

According to Verheggen the insights of the teams and the results will be used to improve the current SunGlaciers.

This news item was originally published on the website of SunGlacier Challenge.