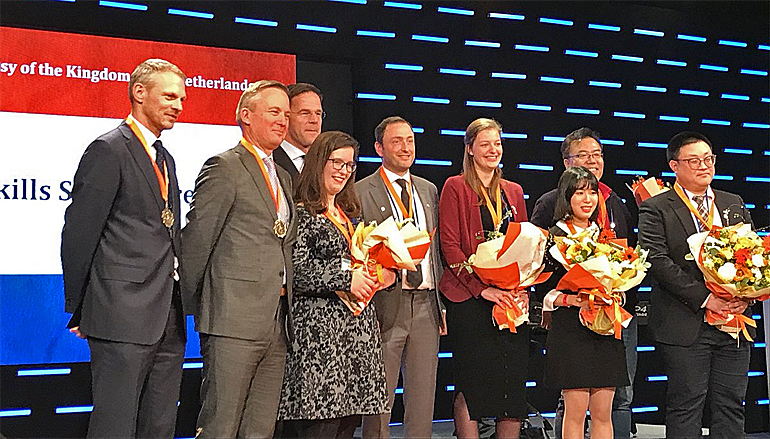 Prime Minister Mark Rutte of the Netherlands announced the winning team of the Wetskills South Korea challenge at the Olympic Winter Games, in Gangneung, on 10 February.

Five teams of Dutch and Korean young water professionals worked two weeks at the Hongik University in Seoul on real water issues and were challenged to come up with an innovative solution.

The winning team came up with an idea for the water utilities of Amsterdam (NL) and Seoul (KOR) to convert fully to renewable energy. 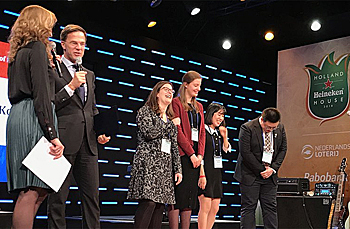 Water experts from Dutch and Korean water companies and institutes presented the young water professionals five real existing water issues. In multidisciplinary teams the water talents worked at the university for a few days on a realistic, out-of-the-box solution.

The winnning team designed a decentralised energy network for water utilities to recover and store energy. The network includes the recovery of energy and heat from waste water inside at house level. Each house has a generator and a warm water tank to recover the energy and a battery to store the energy.

The Holland Heineken House is located close to the Olympic skating stadium and acts as a home for Dutch athletes and their fans during the Olympic Games.

The team with the best solution, to generate more renewable energy from waste water, took the very famous stage – normally for Dutch Olympic medal winners only - to receive the award from Dutch Prime Minister Rutte.

The team consisted of Rianne Meeusen, Anniek Timmerman, Wonjung Chung and Bin Kim (on top photo from left to right in front row with flowers). 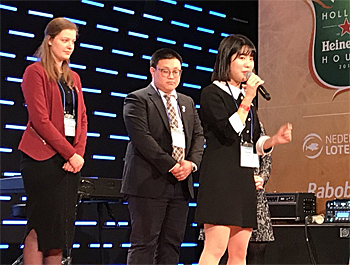 Wonjung Chung of the winning team piches the solution to recover renewable energy from waste water.

Five cases
For two weeks the teams of water talents worked on solutions for five cases:
● Korean water company K-Water asked the youngsters a plan for ecological water management for rivers in South Korea.
● Waternet Amsterdam and the Seoul city council sought for possibilities to generate more renewable energy from water.
● Delfland Water Board looked for possibilities for decentralization of wastewater treatment and recovery of raw materials.
● Korean scientific institute KIST requested a design of a saline water-bearing layer in the soil that can be used as to store energy or fresh water.
● Dutch Province of Friesland and Daegu city asked a team to write a game competition for the development of smart water systems for consumers.

About Wetskills
Since 2010, more than 500 students and young water professionals from 120 universities and organizations have participated in one of the 27 Wetskills Water Challenges. These events took place in Asia, Africa, America and Europe. The next Wetskills Challenge is to take place in Oman late March and will focus on solutions to make water from the air.

Other Wetskills events planned for this year, are Wetskills-Colombia (in May), Wetskills-China (May) and Wetskills-South Africa (June).