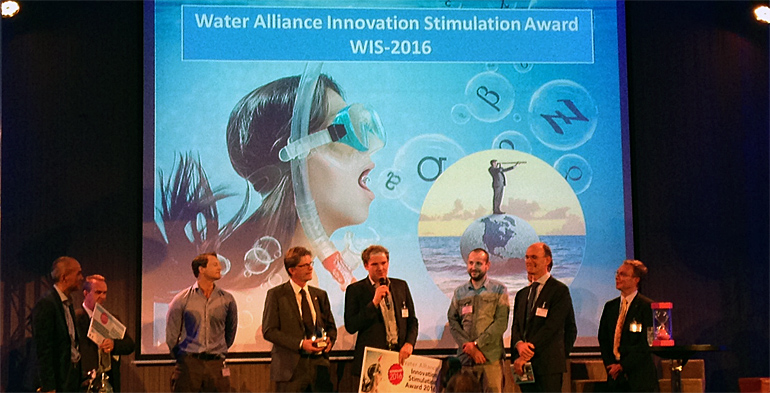 Fleet Cleaner took home the Water Innovation Stimulation Award 2016 for their development of a robot that can clean and inspect the hull of a ship while being loaded or unloaded in the harbour.

Six Dutch entrepreneurs participated in the Finale Battle for the WIS Award in Leeuwarden, the Netherlands on 19 January.

The pitch battle is organised annually by Water Alliance, a public-private partnership to stimulate the business development of Dutch water technology.

The winning pitch was by Alex Noordstrand (on top photo with microphone), one of the two inventors of the robot and director of the technology start-up Fleet Cleaner. He received a cheque of 10.000 euro to support the marketing and communication of the innovative product. 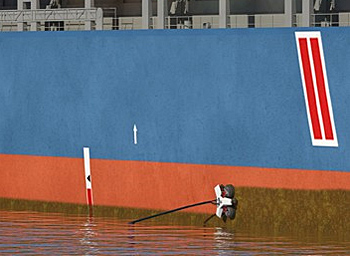 Fleet Cleaner's robot in action on the hull of a ship.

Ship hull cleaning in harbour
Cleaning of ship hulls is mainly done by divers outside harbours. The new developed robot by Fleet Cleaner allows the cleaning to take place while the cargo is uploaded or unloaded.

The robot is attached to the hull of the ship with strong magnets. While moving over the hull computer guided, it removes fouling, such as slime, algae and barnacles.

A prototype of the Fleet Cleaner is currently tested on pilot ships in the harbour of Delfzijl, the Netherlands.

In his pitch Alex Noordstrand revealed his company's ambition to sell over 100 robots to be operated in harbours worldwide.

"A great boost", said Noordstrand in his reaction after having received the award. "When we started several years ago as students not everyone took us seriously. We now know that we have a unique product. For an average container ship of 200 meters long, a cleaning can save up to 300.000 euro a year in fuel savings. We now have requests from all over the world." 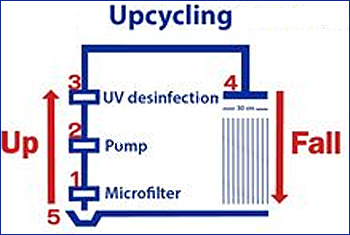 The Upfallshower uses only 1 liter water where a conventional shower would use 30 liters.

Chairman of the expert jury, director Cees Buisman of research institute for water technology Wetsus, praised the robot for its potential for pollution prevention. "An additional filter is now being developed to treat the wastewater that can be collected from the robot during the cleaning process. Just imaging how much the Fleet Cleaner can contribute to cleaner water in harbours. "

Water saving shower
The Upfallshower was pitched by René Betgem of Upfall. It won the running-up award. Betgem developed a shower that reuses a portion of the water by collecting it in a small basin, suctioning it up and filtering and disinfecting it. At the same time, fresh hot water is added to maintain the shower temperature.

The Upfallshower saves 90 percent on water, energy and waste water. 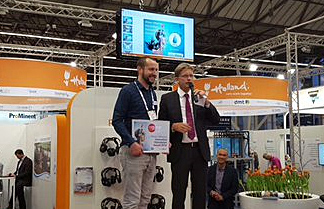 Hand out of the public WIS Award 2016 during Aquatech Amsterdam trade exibition to Casper Groot-Kormelinck of Van Remmen in November last year.

Water reuse in greenhouse horticulture
The audience award was already handed out last year during a similar pitch battle at the Aquatech Amsterdam trade fair part of the Amsterdam International Water Week in November.

The visitors of the trade fair has selected as winner the new DNRI-Acao waste water treatment concept developed by Van Remmen and Bruine de Bruin.

DNRI-Acao is a combination of existing water treatment technologies, specifically developed for application in greenhouses.

It combines advanced oxidation, ultrafiltration and activated charcoal to remove micro pollutants so the water can be re-used in the greenhouse.

Short video presentation of all six innovative water technologies that were pitched for the WIS Award 2016.