A team of three South African and one Dutch students won the Wetskills Water Challenge South Africa 2014. The winning team was announced at the gala dinner of the WISA2014 conference in Nelspruit, South Africa on 28 May.

The WISA 2014 conference was attended by a large Dutch delegation of water experts and 15 organisations from the Dutch water sector were present in the Holland Pavilion. 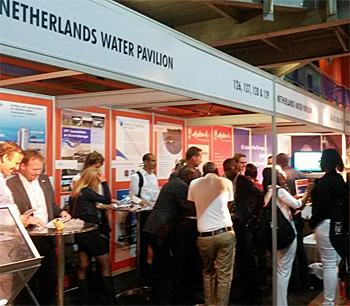 Meeting of Wetskills participants with the Dutch water sector at the Netherlands Water Pavilion.

Pitching of innovative concepts
Nearly 20 students from the Netherlands, Mozambique and South Africa worked in four teams on real water cases and pitched their out-of-the-box ideas at the WISA conference in the Mbombela Stadium, Nelspruit.

The four real water cases were:
● efficient and cost effective solutions to address water and sanitation challenges in the rural areas of Mpumalanga
● turning waste from a wastewater treatment plants into a profitable business
● business wise training development and delivery
● designing a Smart Water App for farmers, citizens, water managers and perhaps even Kruger National Park

Self-supportive practical training
The winning team developed a concept to bridge the gap between academic training and the responsibilities 'on-the-job'. The Dutch World Water Academy challenged the team to make a business model for a practical training. Several Dutch initiatives in South Africa focus on capacity development.

However, these projects are mainly based on Dutch funding resources. The training projects have an added value to the South African water sector and can be translated into money. The winning team suggested a concept for self-supportive pratical training.

About the Wetskills
The Wetskills Water Challenge South Africa 2014 was the twelvth edition of the international challenge that has previously taken place in China, Morocco, Netherlands, Indonesia, Oman, South-Africa, Egypt, Romania and Mozambique.

Waterskills Water Challenge is a program under the umbrella of Human Capital Water & Delta Program and is organised by Netherlands Water
Patnership (NWP), in cooperation with Royal Netherlands Water Network and other partners within the water sector.

The South Africa 2014 edition was supported by Rand Water Board, NWP, WISA, SA Young Water Professionals, Waterschap Groot Salland & Hydrologic, H2Oost, the Centre of Expertise in Durban (a cooperation of Vitens-Evides and eThekwini Water & Sanitation) and the World Water Academy.

The next Wetskills Water Challenge will be organised on the occasion of the Canadian Water Summit in Toronto in June.

Looking back on Wetskills South Africa 2014