The Dutch Association of Water Boards signed an assistance agreement with the South African Ministry of Water for the creation of nine Catchment Management Agencies.

The agreement on strategic cooperation in the joint Dutch-South African Kingfisher programme was signed on 26 May, the first day of the WISA 2014 conference in Nelspruit, South Africa. The partnership will last until 2017.

On behalf of the Dutch Association of Water Boards the agreement was signed by Chairman Michiel van Haersma Buma (right on top photo) of the Delfland Water Board. Deputy Director General Anil Sing (middle) at the Department of Water Affairs signed on behalf of South Africa. The signing ceremony was attended by Dutch ambassador for South Africa, Andre Haspels (left). 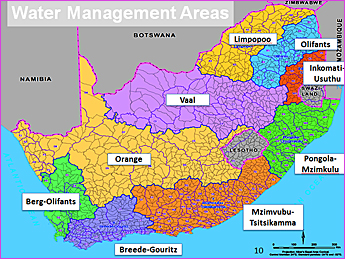 By 2015 South Africa want to have nine Catchment Management Agencies in place, responsible for all fresh water bodies.

Van Haersma Buma: "There is a big difference in the practice of water governance in both countries. At the same time, we face similar issues, such as organization, financing, legislation, enforcement, public participation and knowledge transfer."

At the end of 2015 nine CMAs need to be established. The joint Dutch-South African Kingfisher programme supports this development by providing (Dutch) expertise from water authorities and municipalities.

The CMAs will play a criticle role in managing the country’s scarce water resources, including facilitating stakeholder input for the management of water resources.

The project is supported by the Association of the Netherlands Municipalities, VNG International.

The WISA 2014 conference is attended by a large Dutch delegation of water experts and 15 organisations from the Dutch water sector are present in the Holland Pavilion.