Consultancy firms Witteveen+Bos and Maritime & Transport Business Solutions (MTBS) are working on a strategic plan for the development of port of Cotonou, Benin.

The existing port is characterised by obsolete quaysides and traffic congestion, and requires spatial restructuring. The project plan foresees an increase in annual cargo handling capacity from 7 million to 20 million tonnes per year.

The master plan has been commissioned by the Dutch Embassy in Benin. 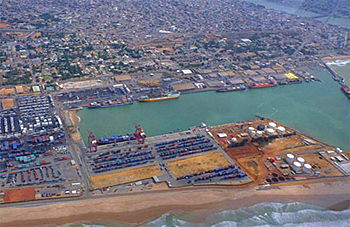 Loosing competitiveness
The port of Cotonou in the West-African nation of Benin – which has a population of approx. 10 million – is of vital importance to the economy of Benin itself, as well as the hinterland, which comprises Niger, Mali, Burkina Faso, and western Nigeria. Due to obsolete facilities, the port is becoming inefficient and losing competitiveness.

The consortium of Witteveen+Bos and MTBS is also preparing the associated investment and financing plan, a port organisation plan and a plan for the implementation of short-term measures, and developing the required institutional frameworks for a public-private partnership.

Future development
As a first step, Witteveen+Bos and MTBS will perform an analysis of the regional market, the port’s layout and logistics, the traffic situation, and strategic environmental aspects such as erosion.

The integrated master plan is aimed at enabling the further development of the port of Cotonou and strengthening its role as a key driver of Benin’s economy. The master plan has a horizon of 2040.

All these stakeholders recognise the importance and urgency of the master plan. Witteveen+Bos, MTBS and the other parties involved aim to produce a future-proof master plan within one year.

This news item was originally published on the website of Witteveen+Bos and MTBS.