Womens Day Conference: tapping into the unlocked potential of women in emergencies 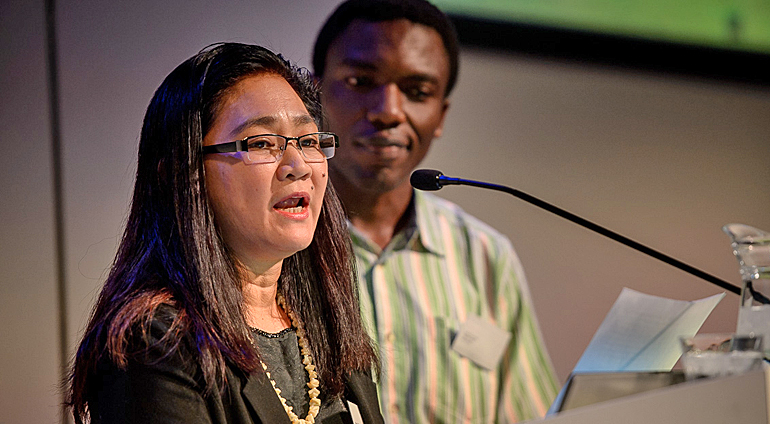 On the occasion of International Womens Day, Unesco-IHE organized a conference on tapping into the unlocked potential of women in emergencies. Disaster risk reduction and emergency professionals exchanged ideas and debated key issues underlying the science and practice of the feminization of emergencies.

The conference took place at Unesco-IHE institute for water education in Delft, the Netherlands on 8 March.

The day was moderated by the passionate duo Maria Luisa Salingay (top photo in front) from the Philippines and Tom Ogol (top photo in the back) from Kenia, who shared their experiences with natural and humanitarian disasters in their countries.

Strong family role
Maria Luisa Salingay, MSc student in Water Quality Management at Unesco-IHE shared a moving story with the audience about why she chose to come to study in the Netherlands. "I chose to leave my comfort zone, a nice family life with four kids after I personally experienced a typhoon that hit the Philippines a few years ago. The tragedy I witnessed made me want to get the best water education there is, so that I can make a real difference in my country".

Maria argued that the issue of gender equality should be placed in the core of our society, the family. Both minds, of men and women need to work together to address problems of inequality.

Part of decision making
Tom Ogol, MSc student in Hydrology and Water Resources at Unesco-IHE, drew on his experience as aid worker in Dadaab, a large refugee camp in North West Kenia. "Women in the camp also have aspirations and ambitions. Looking after the family is so time consuming that there is little time left for them to develop other skills. If men and children contribute by keeping themselves busy with other things, women can generate some sort of livelihood and become part of decision making processes".

Tom gave an example of a well built closer to the camp so that women don't have to walk long distances to the river. In the end they kept walking long distances to collect water because they used this time to catch up with each other. They shared problems and were chit chatting like friends do. According to Tom it is a clear example of women not being included in the process of building a water well. 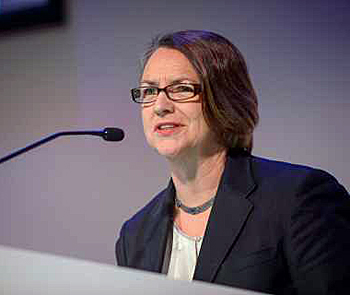 Longworth also pointed out that the real problem lies in every rainy season or living in an area with permanent drought. This is a constant problem, not just one disaster. She called this slow onset hazards versus sudden onset hazards.

"Even today the gender perspective is still largely excluded in disaster risk reduction plans. What needs to change is that we stop seeing women as victims but as resources. Gender is not a women's issue, but a societal issue." 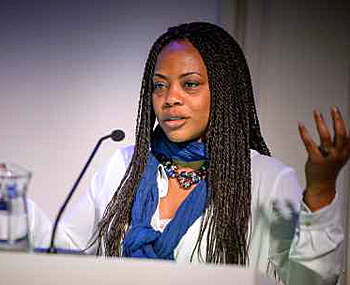 Making things happen
Valerie Nkamgang Bemo is Senior Program Officer Emergency Response at the Bill & Melinda Gates Foundation. She took the audience back to her youth in Cameroon, where her grandmother played a important role. "My grandmother was a farmer and I was so impressed how she was doing stuff. She was really powerful. If you want something to happen, a decision to be done, we had to talk to her. She always managed to make it happen. This is my personal experience, you need a man to say something but a woman to do something!"

In many cultures the elders have the power, although women's power is more invisible, it's definitely there, said Valerie Nkamgang Bemo. 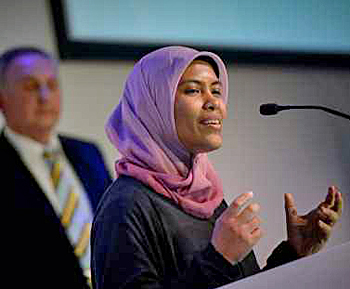 Smart toilet
PhD fellow Fiona Zakaria and her professor Damir Brdanovic presented a new innovative toilet for emergency sanitation. The toilet can be transported easily and has a solar system on the roof.

"Inventions can only become innovations when they are applied", according to Damir Brdanovic, Professor of Sanitary Engineering at Unesco-IHE.

Fiona Zakaria: "Women in emergencies is about strength, surviving, building up another life in the displacement camp. My dream is to make sanitation with dignity. It's a long journey but we are about to pilot the experimental toilet in the field."

This news item was originally published on the website of Unesco-IHE (including the full conference video).

(all photos by Rogier Bos)