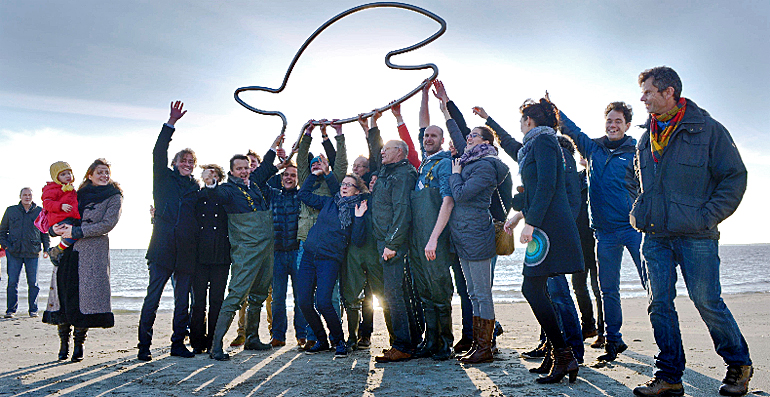 "We need to get hydropower into the 21st century", said American author and essayist Paul Greenberg during the kick off meeting of the World Fish Migration Day 2016 in Washington, USA on 20 May.

While the celebration set off in New Zealand, the World fish migration foundation, held a kickoff event in Washington, USA.

Happy fish
During the celebration the new logo of World Fish Migration Day, the Happy Fish (on top photo), was officially revealed by Johannes Kramer, Vice governor of the Dutch province of Friesland, and Hannibal Bolton, assistant director of the Wildlife sport fish restoration program at US Fish and wildlife service.

Director Herman Wanningen of the World fish migration foundation, announced that the Happy Fish will used as a symbol for fish migration worldwide. The logo will be used for the next celebration day in 2018. 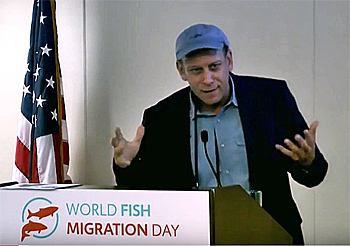 Author Paul Greenberg leads the panel discussion at the global kick off meeting in Washington, USA.

Growing popularity of hydropower
Greenberg lead the panel discussion and remarked that hydro dams are still being built with old techniques, by 'putting as much concrete in as possible to get as much power as possible'.

The issue was raised by Bob Irvin, president of the American Rivers foundation.

He feared the growing popularity of hydropower as a clean, green, renewable energy.

Irvin recognised hydropower as a better alternative than fossil fuel, "But hydropower has its own problems", he warned. One of those being the dams that obstruct rivers and block the migration of fish up and down the rivers. 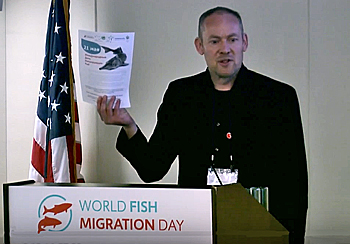 Director Herman Wanningen of the Dutch-based WFM-foundation shows the announcement he just received of an event in Russia.

New hydropower technologies
Greenberg advocated the use of modern technologies instead, such as bottom or mid-stream based systems that do not block the complete river.

Boulet told that the location of the dam is crucially important. "It is all about producing maximum power, while maintaining a maximum river flow", he explained. "Most important of all is to carefully plan where you put the dam".

More power with less dams
The importance of the dam location was confirmed by Chief Kirk Francis of the Penobscot Indian Nation. He told of the successful cooperation with the hydropower sector on the removal of dams in the Penobscot river basin in the northeast of the USA.

"We succeeded in getting down the number of dams, while increasing the power production", Kirk Francis said. "This was achieved by moving a number of turbines around from one location to the other." 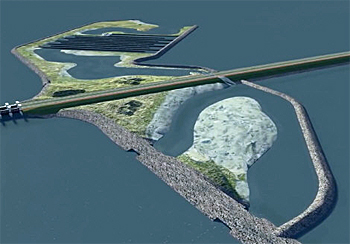 Dutch national water authority Rijkswaterstaat is preparing the construction of a unique 5 km long fish migration river in the mouth of the Rhine river.

Last remaining obstacles on Rhine river
Chairman Gustaaf Borchardt of the International Rhine Commission was also on the panel and he told about the progress on fish migration on the Rhine river. Borchardt was convinced that it is still possible to have salmon fish to swim freely up and down the Rhine river by 2020. "This was agreed by all eight different countries thirty years ago. Now have only three dams left in the upper Rhine."

Also the Dutch government is working hard to meet the deadline, assured Borchardt. "On two important locations they will open the mouth of the Rhine for entry of salmon from the North Sea. In the south the Haringlviet dam will be opened and in the North a very creative fish migration river is planned that will cross the closure dam Afsluitdijk", said Borchardt.

This Dutch closure dam mentioned by Borchardt was in fact the European headquarters of the World Fish Migration Day.