World Fish Migration Day, held today on May 21, 2016, will bring together more than 1,500 organizations, featuring more than 430 events worldwide.

Organized by the World Fish Migration Foundation, this one-day global initiative calls attention to the needs of migratory fish to ensure that more natural river networks remain connected, and those already fragmented can be restored.

The international headquarters of WFMD is hosted at The Nature Conservancy in Arlington, USA.

The European headquarters is hosted at the ‘Afsluitdijk’ dam in the Netherlands, where the latest news will be presented around the biggest tidal fish way project of the world, the 5 km long fish migration river. 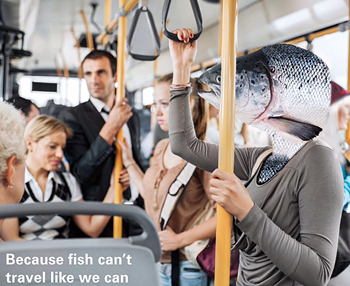 “Free-flowing rivers are key to their survival", Lambertini continued, "and under growing pressure as the world continues to develop hydropower and other infrastructures. It is more important than ever to conserve migratory fish on which ecosystems but also jobs and economies depend.”

Many organizations open their doors to the public, offering a view into special work and projects related to fish migration and river restoration.

Around the globe, millions of people are working together to protect and restore aquatic ecosystems. Despite these efforts to protect native waterways, an alarming number of migratory fish species continue to decline.

The first World Fish Migration Day was held in 2014 and had its headquarters in Amsterdam, the Netherlands.

Video clip on WFMD2016: Fish can't travel like we can