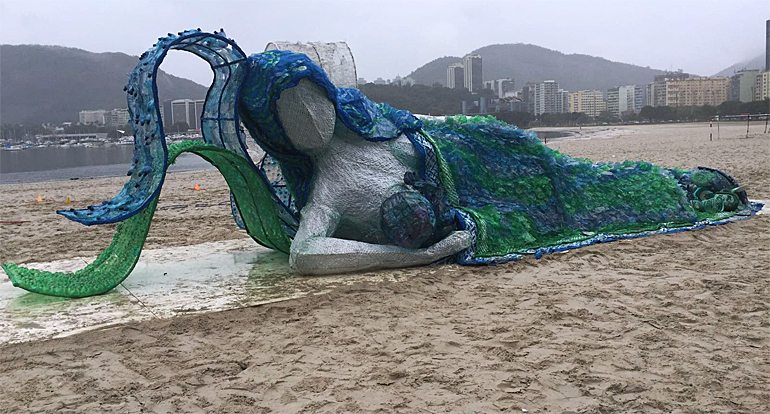 On World Oceans Day - 8 June 2016 - beachgoers in Rio de Janeiro were surprised to find a 12 m artwork, the Plastic Madonna, on their beach.

The artwork features a mother breastfeeding her child and is made of littered plastic bottles. It symbolizes the mother who unintentionally poisons her baby with plastic molecules.

Plastic Madonna is made by Brazilian artist Eric Fuly, based on a design by Dutch artist Peter Smith.

Simultaneously a smaller version of the Plastic Madonna was unveiled in Amsterdam. This is made using 3D printers.

The art project is initiated by Peter Smit, artist and founder of the Klean foundation, and Merijn Everaarts, owner of Dutch-based Dopper that produces recyclable plastic water bottles. Both passionately promoting awareness around the plastic soup in oceans. 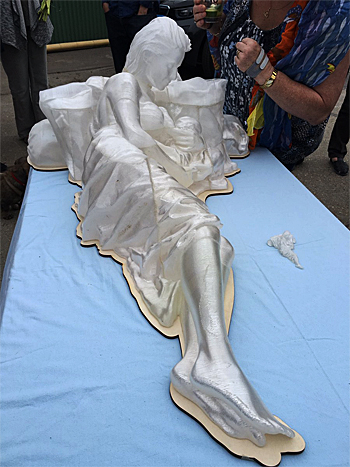 The Dutch scaled version that has been made with a 3D printer, using a filament from recylced plastic litter.

Best place to start: on the beach
The beach was considered a good place to draw the world's attention to the plastic soup issue.

It is the last place before it becomes part of the plastic soup and is eaten by marine animals, the same marine animals that subsequently wind up on our own plates, they reasoned.

An important triggering event for them was release of a report 'The new plastics economy: Rethinking the future of plastics' by the Ellen MacArthur Foundation in January with the headline statistic that by 2050 there will be more plastic in the oceans than fish.

Motivated beachgoers
Dopper Beach Messengers have been actively collecting plastic waste in Rio de Janeiro for months. They did this – together with the local population – during festive beach clean ups.

Beachgoers were motivated to help, having heard the story of these exuberantly kitted out messengers.

In total, at least 65 kilos of plastic has been collected, that is around 4000 PET bottles! Besides, the clean ups have made Brazilians more aware of the negative impact of single-use plastic on the environment and on ourselves.

Transformation of plastic
Plastic Madonna was produced by Brazilian artist Eric Fuly. According to Eric, art is far more than colors and shapes: art has the ability to change lives.

He wants to involve young people in his projects as much as possible. Therefor he involved his students in the manufacturing, finishing, aesthetic development and recycling and transformation of plastic for the artwork.

In this way, he helps young people develop a different perspective of plastic.

Dutch Plastic Madonna
In Amsterdam Peter Smith produced a smaller 1.2 m version of the Plastic Madonna sculpture, using a 3D printer. The inkt was made from recyclede plastic litter.

The Dutch scaled version was unveiled at the FabCity campus in Amsterdam.

The FAB City campus is part of a global project to share knowledge and best practices on urban solutions emerging for cities to become self-sufficient by 2054.

This news item was originally published on the website of Dopper.

The making of…. (in Rio de Janeiro)

The unveiling of … (in Amsterdam)