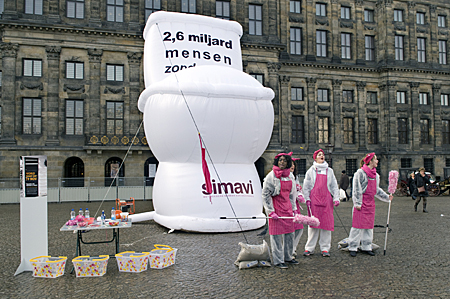 Amsterdam, 19 November 2011 – With a giant toilet on the Dam square in central Amsterdam, the non-governmental organisation Simavi drew attention to the clean water and sanitation crisis on occasion of World Toilet Day 2011.

Over 2.6 billion people still have no access to clean toilets, facilitating the dissemination of infectious diseases such as cholera and diarrhea every day thousands of victims requirements.

Two protesting toilet ladies
On the occasion Simavi asked the Dutch government - by means of a singing act with two toilet ladies - to continue to play a leading role and keep investing in sanitation projects around the world.

The organisation pointed out that clean safe drinking water, sanitation and hygiene in the long term cash out in a clear moral and economic efficiency: business-and profiling opportunities for Dutch business and government and at the same time, large health benefits and increased self-reliance of people in poor countries, particularly for women and girls.