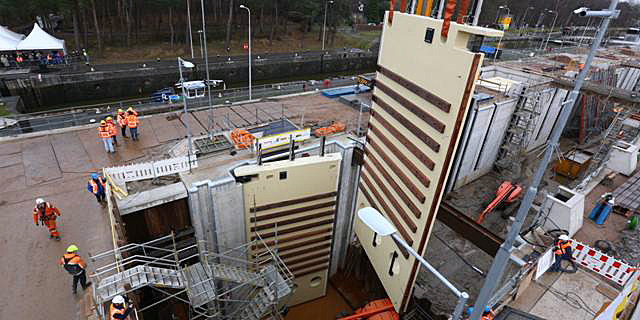 Dutch national water authority Rijkswaterstaat has installed the largest fibre reinforced polymer lock gates in the world in the new Lock III in the Wilhelmina canal, the Netherlands on 9 January.

The 12.9 meters tall by 6.2 meters wide gates have been produced by FibreCore Europe using its special developed InfraCore RFP-technology that makes polymer much stronger.

This technology allows the construction of large strong polymer lock gates with a low self-weight that are consequently fast to operate. 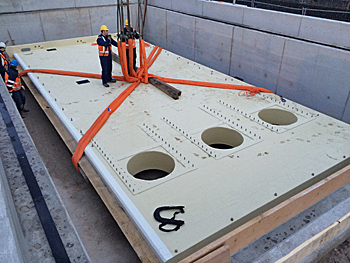 Widening the canal and locks
The installation of the mitre lock gates is part of a major project to widen and deepen the Wilhelmina canal to allow bigger ships to use it. This includes widening the locks in the city of Tilburg to 10,5 meters.

The mitred gates can control a water level difference of no less than 7.90 metres.

The design of the gates was performed by FiberCore Europe’s in-house engineering office.

A major sustainable advantage is that the gates have a two to three times longer lifetime than conventional doors made of wood or steel, because FRP polymer does not decay.

In addition, the pivots of the doors are much less subject to wear because the doors have the same density as water. 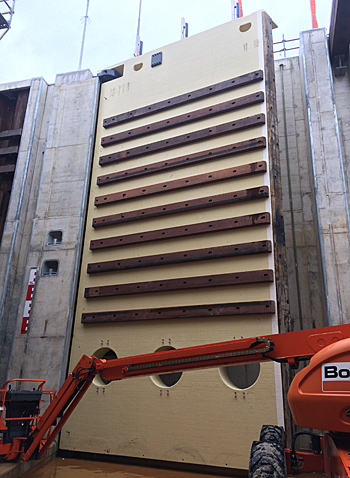 Development of regulations
Consultancy firm Royal HaskoningDHV advised on the design principles. According to its FRP expert Liesbeth Tromp the project demonstrates the progress to make better use of RFP in infrastructure.

"Together with Rijkswaterstaat, we have developed regulations for the application of this innovative material in civil engineering structures", says Tromp. "Good regulations and an understanding of the material is crucial to enable projects of this nature".

This enthusiastic response prompted the organisers of the event, the World association for waterborne transport infrastructure, Pianc, to establish the international working group Composites for hydraulic structures.

About InfraCore
The InfraCore-technology is specially developed for the construction of extremely robust panels of fiber-reinforced plastic (FRP). The first application of these panels were bridges.

The technology offers a solution to the delamination problem with regular FRP structures in sandwich constructions, occurring mainly after impact, followed by fatigue.

FRP structures made with InfraCore technology are insensitive to fatigue and corrosion. This makes the material many times stronger than for instance steel and concrete.

Their design life is expected to be over 100 years.

This news item is based on press releases published on the websites of FibreCore, Rijkswaterstaat (in Dutch only) and Royal HaskoningDHV.

Video of the hanging of the FRP-polymer lock gates in the new Lock III in the Wilhelmina canal in Tilburg, the Netherlands.