The design and feasibility study for the Floating City Project is fully crowd funded. This was announced by director Randolph Hencken of the Seasteading Institute. His foundation raised more than 20.000 USD to start the first phase of the Floating City project.

The ultimate plan is to build the world’s first floating city before the end of the decade.

Next move for DeltaSync
The money raised will be spend on an engineering feasibility study by DeltaSync, a Dutch multidisciplinary research and water architecture firm. DeltaSync will design a floating community which could be constructed within just a few years.

DeltaSync has many years of experiences in innovative architecture and aquatic urban design to the table,  like the Rotterdam Floating Pavilion in the Netherlands.

The only way to do this is to locate the city within shallow or protected seas, where  engineering challenges are less severe. 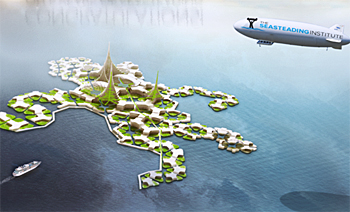 Autonomy in exchange for economic benefits
The institute has narrowed down potential locations in territorial waters and now seeks a hosting coastal country that is willing to grant the seastead autonomy within those territorial waters.

The institute envisions a contract with a host nation which will grant the floating city substantial autonomy within its territorial waters, in exchange for the economic, social, and environmental benefits the seastead will bring to the country

The project picked up mainstream exposure after having been brought to the attention of PayPal cofounder Peter Thiel, who invested 500,000 USD in the institute and has since spoken out on behalf of its viability, most recently in his essay 'The Education of a Libertarian'. TSI has received widespread media attention from sources such as CNN, Wired, Prospect and The Economist,. 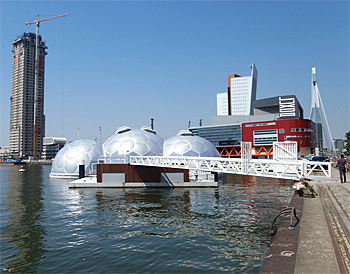 Three transparent domes mark the Rotterdam
Floating Pavilion that floats in the Rijn harbour
since June 2010.

About DeltaSync
DeltaSync is a leading specialist in the field of floating urbanization. It provides consulting and design services and innovative solutions for delta areas. As an interdisciplinary think tank, DeltaSyn also develops and implements flood proofing strategies.

Ideas or strategies are quickly taken to the next level, by providing technically feasible and aesthetically, economically and socially responsible solutions.

Sustainable development is a key aspect for DeltaSync on all scales, from a single building to a complete city. DeltaSync’s mission is to design and develop the first self sufficient floating city in the world.

See the fundraising campaign on the website of Seasteading Institute.

Joe Quirk of the Seasteading's team, inviting people to join him as a seasteader, ready to take the plunge and change the world by creating thousands of floating cities.