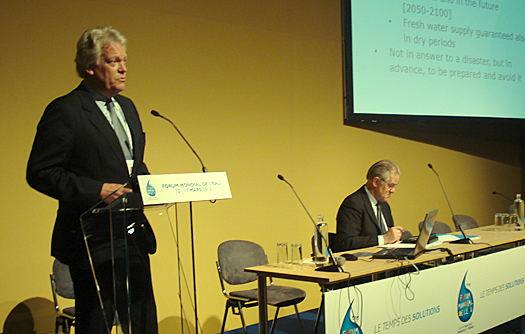 To organize a kind of mechanism for a country to response to the effects of a very gradually changing climate, without overinvesting. That was the ultimate question at the special session on vulnerable delta areas, organized by the Dutch government at the 6th World Water Forum in Marseille on March 13.

A serious rearrangement of responsibilities is needed to realize such a mechanism in all delta areas but everywhere the circumstances are different. So how can the Netherlands take the lead in developing a mechanism and establish a coalition of all deltas? Two important assets that were discussed during the session were the Deltaprogramma and the network organization Delta Alliance.

Discovering tipping points
Deltacommissioner Wim Kuijken opened the session and told the international audience about the Delta act that came in force on January 2012. The act is the juridical basis for the deltaprogramme which is a set of long term plans for the Dutch water authorities to anticipates on the expected rise in sea level and periods of both extremely high and extremely low river discharges.

“By looking into the future it is possible to look back and discover the measure you need to take now. This way we discover the tipping points. The moments that you really have to invest. This avoids over investments”, told Kuijken.

He invited the visitors of the forum to join the Netherlands in an effort to develop a joint roadmap for all deltas. “The Netherlands wants to establish long term relationships with other delta areas in order to learn from each other and do joint fact finding”

Countries with less oiled governance
John Metzger of the Global Water Partnership praised the Dutch approach with the 5 D’s (delta act, delta programme, delta fund, delta decisions and delta commissioner). “It is a good process for making good decisions. But the Netherlands has a well-oiled governance. How can we make this work for countries where the governmental decision making is less organized”, he asked himself. According to Metzger water governance is a good tool but additionally institutional arrangements are also needed.

All deltas are different
The next speaker at the session was Cees van de Guchte, Head Climate Change Adaptation & Integrated Flood Risk Management of the Dutch research institute Deltares. He pointed at international coordination it possible within the Delta Alliance. “This network organization is already active in ten delta areas and ten more are waiting to join”, he explained. The Delta Alliance has appointed coordinators in the various deltas to coordinate the joint fact finding. Van de Guchte himself is coordinator for the Dutch delta.

A joint leanring process
“We find that every delta is different. Not only the scale but also the governmental and cultural settings differ. Even the learning process is not the same. Despite that we are able to exchange existing information and talk about new developments.

“Brazil has many flash floods which hardly occur in Europa. Yet, our European network members can learn from the way Brazil is now taking more preventive measures”. Van de Guchte invited all 160 relevant delta areas in the world to join the Delta alliance network.