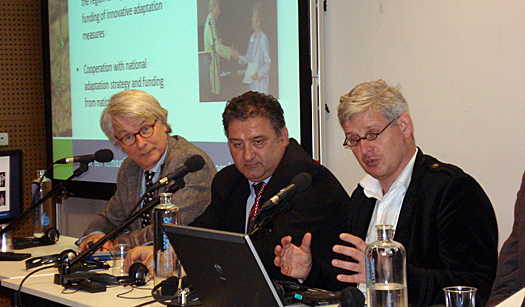 "When the Dutch start talking about drought it gets a bite strange. They have plenty of water but it is the quality that is not always available on right time at the right location". With these words George Constantin (middle on photo) of the Romanian ministry of environment and forests started his contribution to the session at the 6th World Water Forum on March 15th, organized by the province of Noord-Brabant.

The Dutch province is one of the partners involved in the European WaterCoRe-project. In this project provinces of seven different EU-member states share experiences finding the best solutions to prevent drought. In most cases the drought is seasonal and the measures are aimed at water retention in periods of plenty of water.

Sharp increase of extreme warm days
Since 2000 Romania sees an increase of extreme warm days leading to water shortage, told Constantin during the session on drought. ”In 2006 the water level in the Danube was to low we had to shut down our nuclear power plant. We shall have to take measures to keep the water longer in the system and we are looking at the many hydropower reservoirs in Romania”. Constantin expressed his fear for the short term. “At this moment these reservoirs are half empty and with more warm season I do not know what will happen.”

Unique combination of farmer and member of water board
Another speaker at the session on seasonal drought was Peter van Dijk (right on photo). His presence was probably unique at the forum because Van Dijk is both a Dutch farmer of blueberries as well as a board member of a regional water board. Van Dijk is the official representative for all farmers. He explained that the water board was started as a democratic organization by farmer 800 years ago and has ever since been an independent water authority with its own finance based on a special water tax and its own directly elected board.

Only room for small water retention areas
According to Van Dijk his water board participation in the WaterCoRe-project because it expects more drought. "Our only possibility is to buffer more water during the wet seasons. But in a densely populated country the Netherlands that is not easy. The retention areas must be as small as possible. We are experimenting with water farmers. They work in cooperation with the local water authorities and retain as much water on and around their farm as possible".