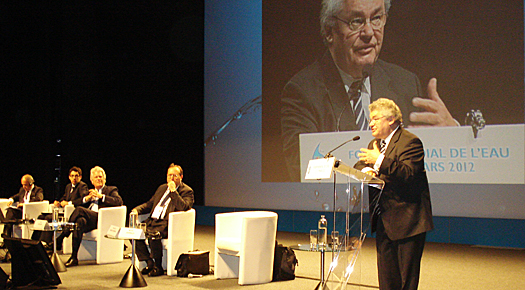 The world is moving towards a water crsis, not the quantity is the problem but how the govern the water resources. This brought director András Szöllösi-Nagy of the Unesco-IHE in memory at the session on global water governance the the 6th World Water Forum in Marseille on March 13. This was one of the outcomes of the previous forum in Istanbul.

Despite numerous initiatives by UN-Water it remains difficult to agree on a global approach for water governance. During the session it proved that sovereignty is the main obstacle. An obstacle that is most manifest when riparian states discuss the up stream and down stream matters of a international river.

Difficult to reach global concensus
The UN-water agency was established in 2003 to promote cooperation and partnership among the UN agencies responsible for global and regional water initiatives. However, despite the numerous initiatives and events organized by UN Water, it has been difficult to reach a general consensus on issues related to water resources management. At the best agreements concerned a set of general recommendations and non-binding plans of action.

This lack of global water governance was addressed by a panel with Michel Jarraud, secretary general of the World Meteorological Organization, Francisco Nunes Correia, president of the Portuguese Water Partnership, Wim Kuijken deltacommissioner of the Netherlands and Vicente Andreu, president of the Agencia Nacional de Aguas of Brasil.

Need for a global institute on water governance
“Why is this”, asked Szöllösi-Nagi the panel members. “Why is the water management in one country part of the ministry of environment and in another part of the ministry of agriculture? Why is it that it takes the UN 27 years to come to a binding convention that is agreed up on by over 100 countries but is still not ratified?” Szöllösi-Nagy suggested to create a global institution for water governance and took the opportunity of the session at the forum to take about who such an institution should be organized.

New hydrological data needed for future investments
Michel Jarraud, secretary general of the World Meteorological Organization agreed took look at water from a global level. The climate change is a global process with a tremendous impact on water systems. “We shall need new hydrological data. We need this data to make good decisions on investments for water infrastructures to last decades. Nations lack this information.”

According to Jarraud this justifies the need for global water governance. In this respect also the central collection and interpretation of hydrological data collected by satellites was mentioned. Technological developments are going so quickly, it is inefficient to monitor this on a national level.

Involve all decision makers at all levels
One of the panelist, special deltacommissioner Wim Kuijken of the Dutch government pointed out that it is important to organize water governance in a horizontal way, together with all decision making authorities at all different levels. “It takes more time”, Kuijken assured, “but the quality of the decisions improves dramatically. Especially for long term planning this is crucial. “In the Netherlands will have a special programme that links all these decision makers to a higher level.”

A own house for water
The panelists agreed on the observation that climate change is a global issue, but climate adaptation is a local matter. So water governance needs the coordination at different levels. Vicente Andreu of the national Brazilian water authority, challenged the World Water Forum to bring forward a strong statement on global water government as an input for the UN summit on environment Rio20+ in June. “Water must have its own house. It is essential that we come to a better understanding of climate adaptation”. He also advocated to involve politicians more in the decision making of river basins.

Input for Rio20+
He invited the water forum to take a strong lead in one of the nine dialogues that will be held at the Rio 20+ conference. “One of the dialogues is about water and the draft text for the convention is still very bad. We need a main proposal from this forum to give water a more prominent place, along with the other environmental issues that will be discussed in Rio de Janerio in June”. As far as Andreu was concerned, the proposal for a global water governance institute could be such a good input.