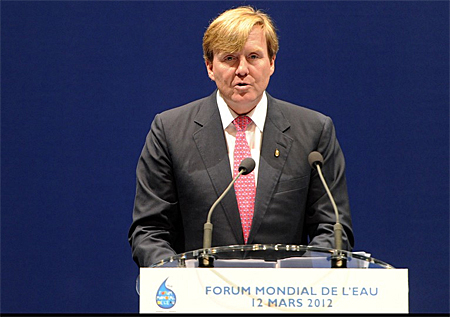 During the official opening ceremony of the 6th World Water Forum in Marseille on March 12 the Dutch prince of orange addressed the forum attendees from over 140 different countries about the good news that the UN millennium target drinking water has already been met. As Chair of the UN Secretary-General's Advisory Board on Water and Sanitation (UNSGAB) he felt encouraged by the recent news: . “Officially, this is the first MDG target to be achieved by the international community. We should be extremely encouraged by this news. Since 1990, two billion people have gained access to drinking water.”

Big role for piped connections
According to the prince the biggest shift was made in the use of piping water connections. The number of people in developing countries using piped water connections raised from 32 % in 1990 to 46% in 2010. “This is the 'time for solutions', and it is clear that utilities delivering piped supplies probably play the biggest role in solving our drinking water challenge. A good investment for the future is increasing both the human capacity and financial solvency of utilities”, told the UNSGAB chair.

Work to do in sub-Saharan Africa
Yet it is no time to sit back, said the prince. “We also know that only 11 of the 50 countries in sub-Saharan Africa have met the MDG drinking water target. Should we be pessimistic? I don't think so. The MDG targets are particularly challenging to countries starting from a low 1990 baseline, especially if this is coupled with high population growth. Both apply in sub-SaharanAfrica. We did the maths and found that an astonishing 275 million people there had gained access to drinking water

Deep-rooted problems
At the openings ceremony the French prime minister Francoise Fillon underlined the role of the Wold Water Forum for the world community to come up with solutions . “The challenges are huge and the problems are deep-rooted. Each year, we mourn millions of dead from the health risks that this causes. This situation is not acceptable -- the world community must rise and tackle it."

On the first day of the forum the French government announced 50 million euro of additional water aid: 40 million for African countries and 10 million for a desalination plant in Gaza. 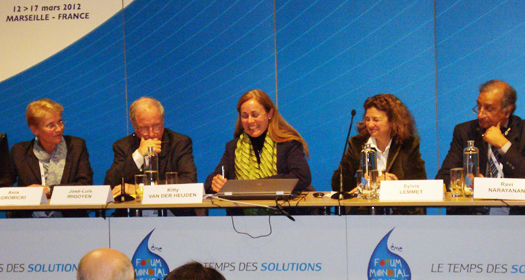 One of the first sessions to take place was about the green growth and the value of ecosystems. For the Netherlands the panel was joint by Kitty van der Heijden (middle) of the ministry of Foreign affairs. 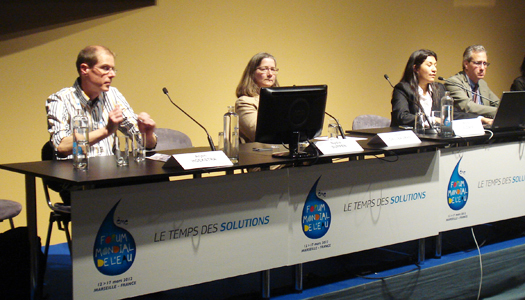 The first session about the Water footprint made clear that in many areas around the world there is an enormous pressure on the water system. Presence in this panel was Arjen Hoekstra (left) of the Twente University. 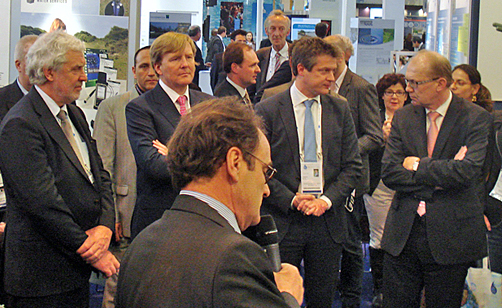 The welcome reception at the Netherlands Water Pavilion was attended by the HRH Willem Alexander, Prince of Orange, Chairperson of the United Nations Secretary General's Advisory Board on Water and Sanitation.