Delta Marine Consultants has signed a license agreement for the use of 12,500 m3 of Xblocs for the construction of the new marina in Cadzand-Bad in the Netherlands. The marina of Cadzand is part of the upgrading of the coastal defences at Cadzand.

The project comprises of two breakwaters built with 4m3 and 1.5m3 Xblocs. The Xblocs will be cast in Zeebrugge by Betonac (BAM), and transported by barge to Cadzand.

The breakwaters will be built by Combinatie Cadzand Bad, a joint venture by BAM and Martens Van Oord.

Interlocking armour unit
An Xbloc is an interlocking concrete block designed by Delta Marine Consultants to protect shores, harbour walls, seawalls, breakwaters and other coastal structures from the direct impact of incoming waves.

Due to the highly porous armour layer - layer porosity of almost 60% - constructed with Xbloc units, the energy of the incoming waves will be largely absorbed. The Xbloc armour layer is therefore able to protect the rock in the under layer from erosion due to waves. 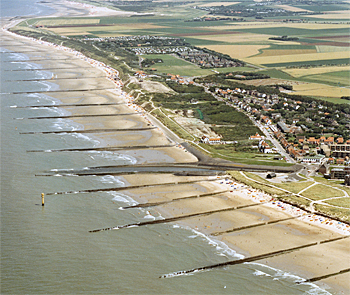 Current coastal situation at Cadzand-Bad with two training walls leading the outlet of the drainage canal into the North Sea.

Stronger coastal defence
The new marina of Cadzand-Bad will accommodate some 125 berths, located between the enforced breakwaters. The breakwaters will also protect the sea outlet of a drainage pumping station. Currently the outlet is protected by training walls.

Cadzand-Bad is one of the final projects of the coastal enforcement programme Zwakke Schakels (Weak Links). By late 2015 one kilometer coast will be strengthened to withstand a super storm that may occur once every 4000 years.

About Xbloc
The Xbloc armour unit derives its hydraulic stability from its self-weight and by interlocking with surrounding units. The average concrete saving yielded by incorporation of Xbloc units is up to 15 percent compared to other single layer armour units.

Since a single unit can weigh up to 45 tons, the construction is done as close as possible to the area of application.

Xbloc amrmour units have been applied successfully on many locations around the world since 2004.

This news item is based on a press release published on the website of Xbloc.