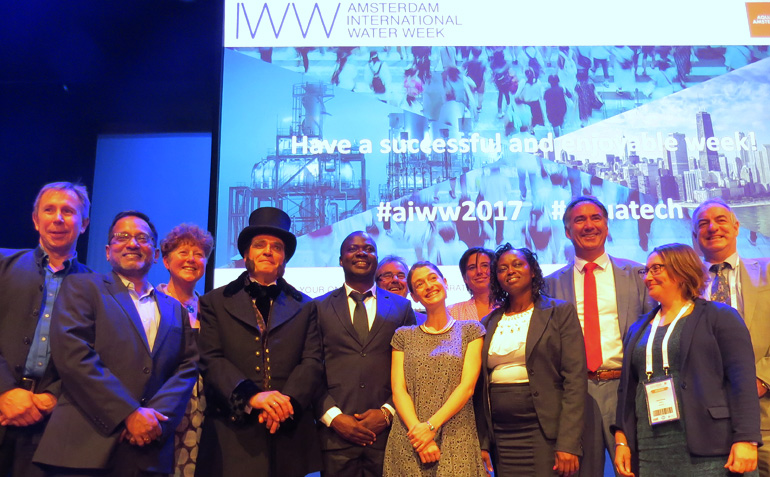 A rise of the sanitation economy boost payable and sustainable services for improved sanitation. Financial institutes need to recognise more the potential value of pee and poop as a source for biogas and nutrients. That was the key message at the Sarphati Award workshop that was attended by the award winners Sasha Kramer of SOIL and Abhijit Banerij of Finish. 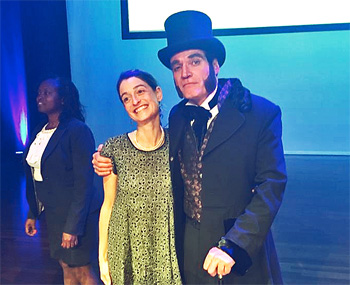 The 'old' and the 'new' Sarphati: Doctor Samuel Sarphati (right) came in from the afterlife and met the award winner of 2017 Sasha Kramer of SOIL.

Exemplary work
The Jury decided to award Sasha Kramer (middle on top photo), who founded SOIL in 2006, for her exemplary work to provide sustainable sanitation services in Haiti, with an approach they considered to be replicable in many other situations, especially in fast growing peri-urban areas.

This year’s Sarphati Sanitation Award for Young Entrepreneurs, went to Mr Ahijit Banerji (seond left) of FINISH Society for his work as financer of sanitation and health projects in India.

On shoulders of giants
At the workshop Sasha Kramer reminded the attendants that the Amsterdam general practitioner Samuel Sarphati had already discovered the economic potential of faeces and urine some 150 years ago. As true entrepreneur, Sarphati had the faeces collected and applied as the fertilizer to crops on his estate and brought fruit and vegetables back to Amsterdam for the benefit of his patients.

According to Kramer today’s entrepreneurs in the field of sanitation, including herself, build their success on the shoulders of giants such as Sarphati.

However, there is still much to be done, Kramer said, referring to the 2 billion people in the world that still lack access to a clean toilet. 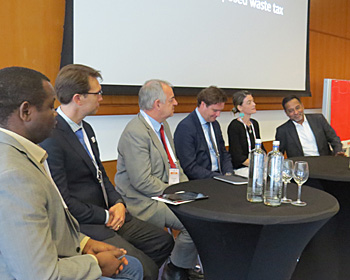 ‘Neither meet the needs’, said Kramer. ‘and both lead to unsafe situations. In homes there is hardly space of a latrine and often the faeces are dumped just outside the settlements, leading to soil degradations.’

The disadvantage of a centralized sewage system is that there is hardly water to flush the system. And in case of extreme rainfall, the systems are vulnerable to floods and uncontrolled spreading of pathogens.

Huge market potential
Award winner Ahijit Banerji mentioned the need to raise the awareness of the people living in the slums. ‘Our organisation Finish, focusses on the finance of sanitation services in India. For us it is important to aggregate demand for proper toilets and vendors that want to transport and handle the sludge’.

Finish realised 600.000 clean toilets in India since it started in 2010. ‘We see a huge market for sanitation’, Banerji said, ‘and social impact bonds can enable us to attract investors. However, we still concentrate on smaller towns where we understand the sanitation and waste markets better. The circumstances in big cities are too complex’, Banerji said.