AIWW Aquatech: Cities are innovation hubs to build resilience against floods and droughts

"Cities are the hubs of innovation when it comes to climate adaptation. Facing more droughts and floods, they will have to implement more resilient water infrastructure", predicted Dominic Waughray of the World Economic Forum at the Resilient Cities Leaders Forum in Amsterdam, the Netherlands, on 4 November.

The Resilient Cities Leaders Forum was one of the highlights of the Amsterdam International Water Week that took place together with the Aquatech Amsterdam trade exhibition. 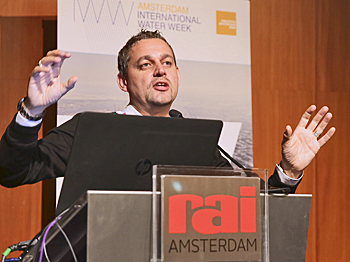 Dominic Waughray of the World Economic Forum setting the scene at the Resilient cities leaders forum.

Not on the programme, representatives in the audience improvised additional pitches on Kampen (the Netherlands), Venice (Italy) and Cities of India. 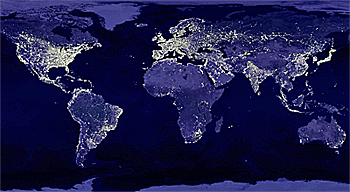 Waughray showed an image of Earth's city lights that matches pretty much the global map of water scarcity.

Water scarcity relates to urbanized areas
Setting the scene Waughray showed a satellite image of Earth’s city lights. The bright areas matched well with the global map he showed of the areas in the world where water is becoming scarce.

As Waughray explained the bright areas on the satellite image reveal concentrations of economic activity in and around cities. Apparently these concentrated activities lead more and more to water scarcity.

Water scarcity is no longer limited to arid areas and deserts but is expanding to areas where water demand is exceeding a sustainable supply. 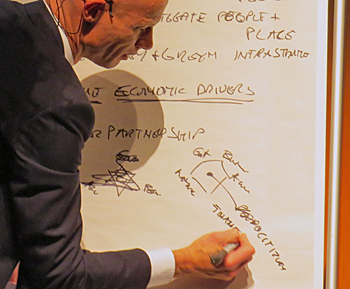 Dutch special water envoy Henk Ovink taking the findings of the round table on governance that included the advice to put ' citizens' always in the middle of partnerships.

Citizens in the middle
Waughray advised the mayors that were present at the forum not to forget their citizens. "Create conditions for change and get the people behind you", he said. "Make people aware of the need for redesigning the city before you jump into projects".

One of the round tables discussed the issue of governance. Reporting back its finding, the participants of this table also emphasized the importance of engaging the citizens.

Their key findings where very complex. However, one message stood out: always put the citizen in the middle.

All models to fail
The forum was led by Dutch special water envoy Henk Ovink and at the overall closure of the international conference he addressed this complexity of climate adaptation.

Ovink said that the challenges of urban resiliency will gradually change over the coming decades, so he believes there is no single model to solve all issues. "If we choose all models will fail, but if we don't choose we will fail also. It is about the process. Get on track and start moving", he encouraged the participants of the conference.