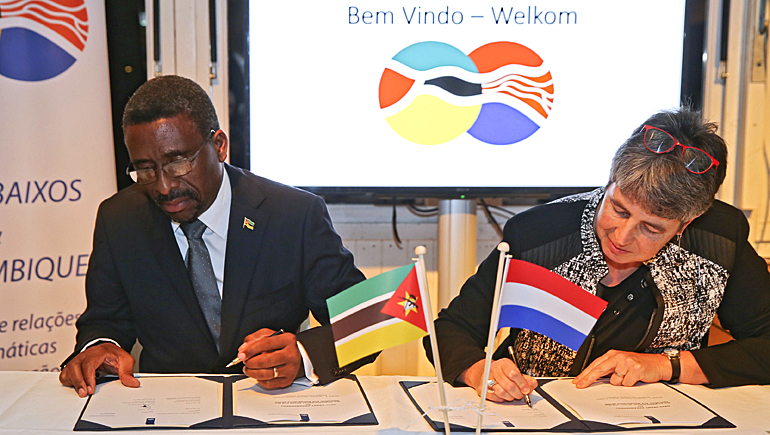 Mozambique and Dutch governments signed a grant agreement and a letter of intent on integrated water management and flood protection during the Amsterdam International Water Week on 3 November.

A large delegation from Mozambique attended the signing ceremony that commemorated 40 years of water cooperation between the two countries. 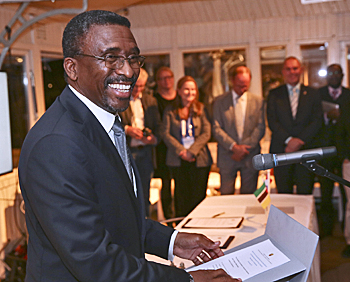 Mozambique minister Martinho looked forward to continue to cooperate with the Netherlands on flood risk reduction. (photos by Rob Kamminga)

The letter of intent relates to capacity building in the area of integrated water resources and flood risk management.

It involves cooperation between the Dutch Niche program and a consortium of higher education institutes in Mozambique. This project has a budget of around 3 million euro.

Deputy director-general Reina Buijs said on the occasion: “We look back at what our water cooperation has achieved in the past 40 years. It is fair to say that you have come a long way.”

Floods and droughts
Buijs also looked ahead and said Mozambique has many challenges remaining in the area of drinking water and sanitation, water resources and water risk management. As well as in the area of water efficiency in sectors such as agriculture, industry and energy.

Mozambique faces a very strong El Nino this year, Buijs continued. At this moment the country is hard hit by drought. “Harvests are likely to fail in many regions in the coming season. Food insecurity may threaten millions of people. When it rains it pours in Mozambique, but when it doesn’t, it’s dry to the extreme! 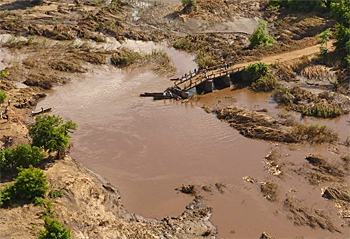 Minister Martinho was only one week in office when heavy rains caused large floods in the Licungo river basin.

Large flood during first week in office
Minister Martinho recalled his first week in office last January when the large flood in the Licungo basin occurred. “This flood caused loss of lives, serious damages and significant loss of GDP. Transport and electric power was interrupted affecting also other development sectors. In this context, we would like to thank the Government of the Netherlands for the assistance through the Disaster Risk Reduction team sent to our country.

New strategy
“To me, it brought home the message”, Martinho continued, “that a paradigm shift, a new strategy, is necessary to protect our country from the increasing occurrence and damage of floods.”

According to the Mozambique minister this new strategy has to respects the force of the water during floods, by giving more space to the river to discharge flood waters. “It means a combination of hard and soft measures to reduce the impact of floods”.