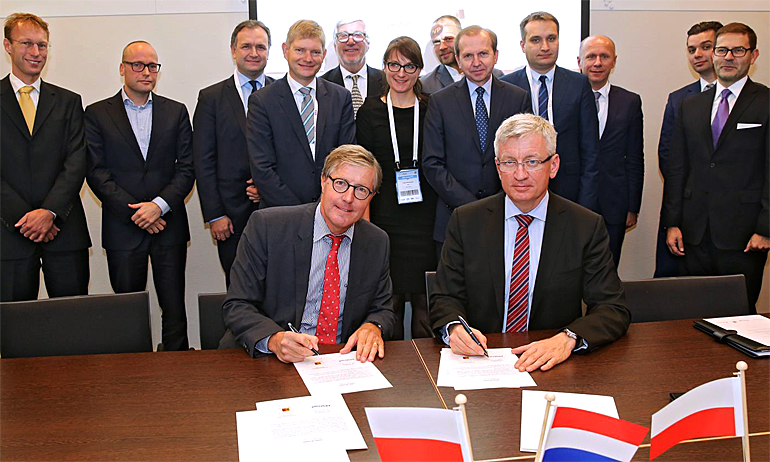 The city of Poznan and the Dutch province of Zuid-Holland signed a letter of intent to continue the Dutch-Polish cooperation on the development of the city's waterfront and the revitalisation of the Warta river.

Poznan has started the implementation of the Strategy plan Poznan-Warta 2012-2030 and a consortium of Dutch companies will advise the city on all water management related aspects.

Mayor Jacek Jaśkowiak (right on top photo) of Poznan and Wiebe Brandsma of the province of Zuid-Holland, signed the letter of intent during the Amsterdam International Water Week on 4 November. 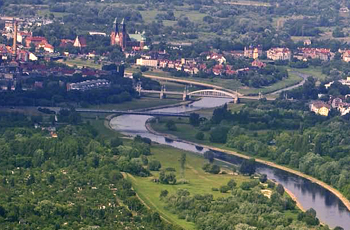 Pitching the city's future plans
The signing ceremony was part of the programme of a Polish delegation from Poznan that participated in the 'resilient cities' track of the two-day conference of the Amsterdam International Water Week.

The delegation pitched Poznan's future plans and shared their experiences on climate adaptation in a workshop together with 13 others cities, including New York, Brisbane, Jakarta, Toronto, Miami, Cape Town and Copenhagen.

Mayor Jaśkowiak told in his pitch that he wants to maximize the green and blue elements in his city. One of his priorities is to 'bring back the water to the city'.

Re-embraced river
The Warta river has flooded Poznan several times in the past and the city gradually developed away from the river.

Now the city has embraced its river again. This summer its citizens and tourists could visit the city beaches and passenger ships returned to the river.

Apart from these new seasonal activities, large investment projects are planned. One of the plans envisions the reconstruction of an old river arm in the city centre and revitalise an historic royal route. 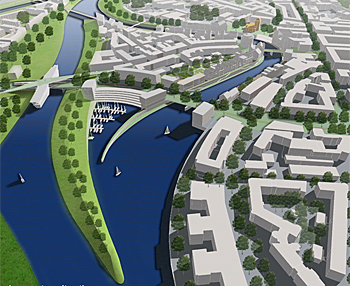 One of the plans is to bring back the old river arm of the Warta and redevelop the former isle of Chwaliszewo and its banks.

Strategic development plan
The prolonged Dutch-Polish cooperation builds upon the joined publication in 2012 of the Development strategy for the river Warta in Poznan.

The strategy addressed the future development of the city towards the Warta river.

It incorporated a long term plan to revitalisation of the Warta river, as well as the development of a new attractive waterfront.

The strategy plan was compiled by the partnership Na Rzecz Warty, including the city of Poznan and Dutch firms Vastint (private investor), KuiperCompagnons (spatial planning) and Royal HaskoningDHV (consultancy).

This news item was originally published on the websites of Netherlands Water Partnership (in Dutch only) and the City of Poznan (Polish only).