Consultancy firm Arcadis announced that the Port of San Francisco has selected CH2M in partnership with Arcadis to lead the design and engineering for the 10-year Seawall Resiliency Project.

Arcadis will lead risk analysis, coastal engineering and modeling while CH2M will provide marine and structural engineering services for the seawall and other structures.

The total fee for the contract amounts to 40 million US dollar. 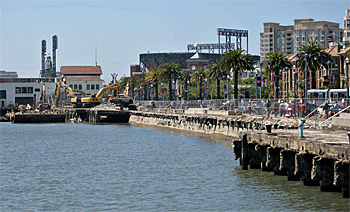 The current seawall needs to be redesigned.

Seawall fortification
The aim of the San Francisco Seawall Resiliency Project is to fortify 3.5 miles of a century-old sea wall protecting the city's most treasured waterfront from Fisherman's Wharf to Mission Creek.

Strong water management position
According to Wijsman Arcadis brings its Dutch heritage of addressing coastal resiliency and its broad experience in civil engineering and coastal protection in urban settings, most recently in New York City and in New Orleans after major hurricanes.