The 50 million UK pound flood alleviation scheme in Leeds which uses moveable weir technology – a first for flood risk reduction in the UK – has opened.

The first phase of the award-winning Leeds Flood Alleviation Scheme, delivered by a consortium of BAM Nuttall and Mott MacDonald BMMjv), not only uses state-of-the-art flood defence engineering techniques but is one of the largest river flood alleviation schemes in the country.

A stretch of 4.5 km of the river Aire has been reconstructed.

Protecting city centre
The scheme comprises three main elements: state-of-the-art mechanical weirs, the merging of the river and canal and flood walls and embankments stretching 4.5 km through the city centre.

The new weir gates are supported by giant inflatable neoprene bladders that can be lowered when high river flows are expected.

It takes around two hours for the gates to lower, and thanks to the installation of these weir gates, it has been possible to keep flood defence wall heights to a minimum so as not to spoil views of the city centre waterfront.

Environmental enhancements have been integral within the scheme design with fish and eel passes installed at both weirs. 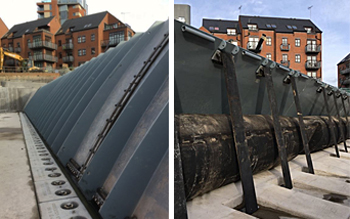 The new weir is moved up and down with air bladders.

Less bottleneck flows
In addition to these measures, the removal of the manmade island Knostrop Cut, which separated the canal and river, has been removed to improve a bottleneck for flows.

180,000 tonnes of material excavated from the site has been reused on a local development site and also on diverting the Trans Pennine Trail which previously went across the manmade island. Reusing this material has saved the project in the region of 6 million UK pound.

First in UK
Project Manager for BAM Nuttall, Andy Judson said: ‘The project's main innovation are the moveable weirs, controlled by air bladders. This is the first time this has been used for flood alleviation in the country. We’ve had a really strong ‘one team’ ethos on this project. We’ve all been co-located and understood that by working together, we would get the job finished on time and on budget’ 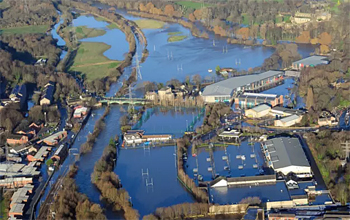 Serious flooding in Leeds during Christmas 2015 fuelled the debate on the need for additional measures on top of the ones now completed.

First phase completed
Led by Leeds City Council in partnership with the Environment Agency, the scheme will provide more than 3000 homes, 500 businesses and 300 acres of development land with increased protection against flooding from the River Aire and Holbeck.

Leader Judith Blake at the Leeds City Council said: ‘We are delighted to see this much-needed first phase of the Leeds Flood Alleviation Scheme opened.'

Balke continued: 'As could be seen by the devastation at Christmas 2015, providing increased flood protection in Leeds is essential in terms of reassuring our residents and businesses, and this fantastic state-of-the-art scheme provides it for the city centre and downstream at Woodlesford.’

A consultation on the second phase of the Leeds Flood Alleviation Scheme is now open until 16 November, to provide increased flood protection to communities upstream of the city centre.

This news item was originally published on the website of Bam Nuttall and UK government.