Africa and agriculture are two topics stressed by the Moroccan government at the United Nation's 22nd climate summit that is taking place in Marrakesh, Morocco.

Countries in the Northwestern Maghreb-region are very much aware their agriculture sector is facing more extreme droughts. The existing, mostly traditional, agriculture crops have only a very limited drought tolerance, so adaptation to new methodes is inevitable.

More resilient and more productivity
At the COP22 this was marked by the launch of the Adaptation of African Agriculture (AAA), highlighting a sustainable increase in productivity and agricultural income, as well as adaptation and climate change resilience.
The new initiative aims to contribute to the roll-out of specific agricultural projects.

The launch shows that climate adaptation is gaining more momentum at the annual cimate summit that used to focus only on the transition to renewable energy. 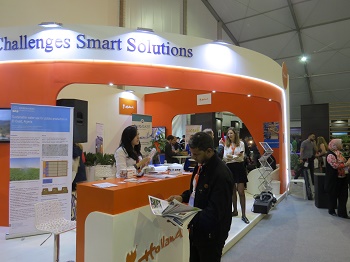 Holland pavilion at COP22 in Marrakesh.

Drastic reduction of agricultural water use
The Holland pavilion at the climate summit also adressed the drought risk for African farmers by showing two Dutch supported initiatives that can drastically reduce the amount of water used in farming.

At the pavilion Nicolaas Visser, agricultural counsellor for Northern Africa at the Embassy of the Kingdom of the Netherlands in Morocco, pointed out that both initiatives have a potential of up to 90% water reduction by efficiently delivering water directly to plants.

One of the initiatives is a greenhouse project near the Moroccan coastal city of Adagir. Together with the Moroccan ministry of agriculture the Dutch embassy is creating a centre of excellence in horticulture to pilot new innovative greenhouse technologies to increase the productivity per square meter.

Hydroponic cultivation
Together with the Wageningen University a green house has been designed that specifically meets the local climate conditions with extreme temperature and decreasing water availability.

"Farmers are growing tomatoes in greenhouses that were originally designed for bananas", says Visser. "By introducing circular substrate, we think we can reduce the water from 40 liter water per kilogram tomatoes to only 4 liter".

The construction of the first 1 ha greenhouse is expected to start early next year. "It will be a demonstration greenhouse so we can optimize the inside growing conditions to local circumstances", Visser adds.

The second initiative shown at the Holland pavilion at the COP22 is the El Oued sustainable water project for potato production in Algeria. 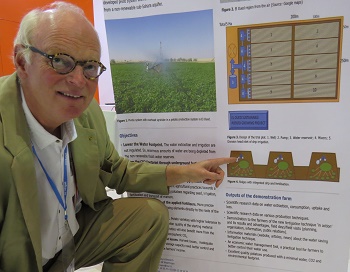 Nico Visser explaining the unique 'fertigation' method to be used to grow potatoes in Algeria.

Underground fertigation
"Algeria is importing potatoes and is interested in smart methods to increase their own national production", Visser explains. "Currently their potatoes are grown in ten thousands of 1 ha circular pivot irrigated fields that use groundwater from an ancient underground aquifer. Nobody knows to what extend the water withdrawal inluences the acquifer."

With support from the Dutch governement a project has started to replace the current potato cultivation with a totally new methode, combining underground fertilisation and irrigation.

The underground irrigation delivers the water closely to the roots of the potato plant. This limits the current water loss due to evaporation.

"In the Netherlands a machine has been developed that can create a ridge, plant the potato and burry the drip drain. All in one go", Visser continues.

Mid-2017 the first plot of 5 ha is expected to be constructed. Visser expects a water saving of 80 percent.

The Holland pavillion shows a real greenhouse with hydroponic cultivation. A group of Dutch suppliers is present as the Desert Growing collective for the turn key delivery of greenhouses in this water scarce North African region.

Read alsin thid on this website
● COAG25: Sustainable agricultural water use starts with improving the soil, 28 September 2016
● Kenyan farmers supported for better access to 'smart water' products and services, 15 June 2016
● Adaptation Futures 2016: A pat on the back and off to COP22 in Morocco, 13 May 2016
● COP21: Adaptive planning for river deltas calls for flexible strategies, 10 December 2015
● Country: Morocco
● Expertise: Water and AgriFood