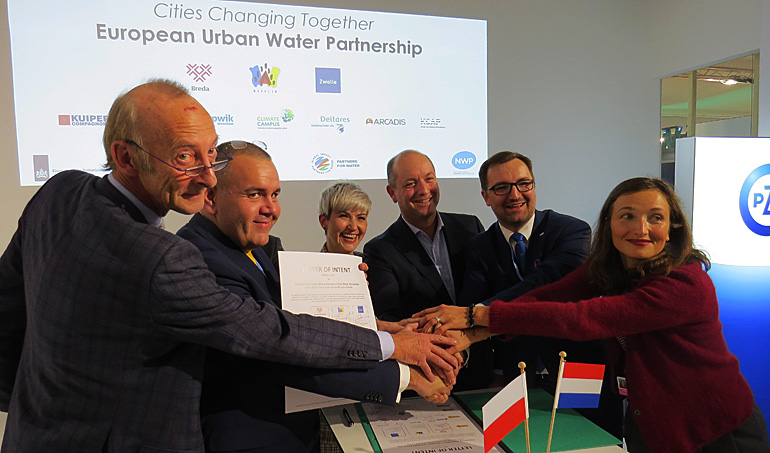 Dutch and Polish cities, companies, knowledge institutions and NGOs signed a Letter of Intent to realise green-blue infrastructures in the Dutch cities of Breda and Zwolle, and the Polish city of Wroclaw.

Many participants had already signed the letter of intent but the final signing took place in the Polish pavilion at the COP24 climate conference on 8 December.

Attenders of the signing were Undersecretary of State Slawomir Mazurek of the Polish Ministry of Environment, Elena Visnar-Malinovska of the Directorate-General for Climate Action of the European Commission and chairman Menno Holterman of the Amsterdam International Water Week.

The signing was the result of many contacts between the cities of Breda, Zwolle and Wroclaw that started at the City Leaders Forum of the Amsterdam International Water Week in 2017. 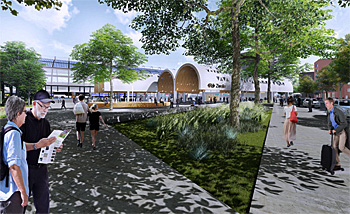 Early-stage involvement of urban landscape designers and researchers can enrich a green-blue project before a city starts the procurement phase.

New standard for implementation
Special about the Dutch-Polish cooperation is its hands-on approach to implement a green-blue project in each of the three cities.

The wide coalition is built around the concept of government-knowledge-business that breaks with the usual top down procurement process for new drainage infrastructures.

The early involvement by businesses and knowledge institutes allows cities to improve their green-blue plans before they go into the procurement phase, making them more efficient in terms of design, construction, costs and acceptance by citizens. 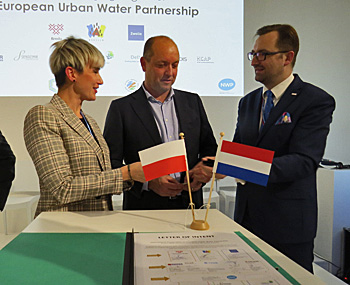 Working ateliers
The cooperation will start with working ateliers in all three cities. New insights and ideas evolving from these meetings will be shared and analysed.

The overarching goal of the international cooperation is to develop a new standard for implementation, such as suitable regulatory conditions, smart financing, stakeholder participation and community involvement.

If proven in practise, a European Urban Water Partnership will be established to roll out the plan, with the aim to accelerate climate adaptation in middle-large European cities.

Besides the cities of Breda, Wroclaw and Zwolle, the other parties that signed the Letter of Intent are urban planning and design offices KuiperCompagnons and KCAP, knowledge institute Deltares, engineering consultancy Arcadis, Polish water utility MPWiK and NGO Sendzimir.

The cooperation is facilitated and supported by the Netherlands Water Partnership (NWP).