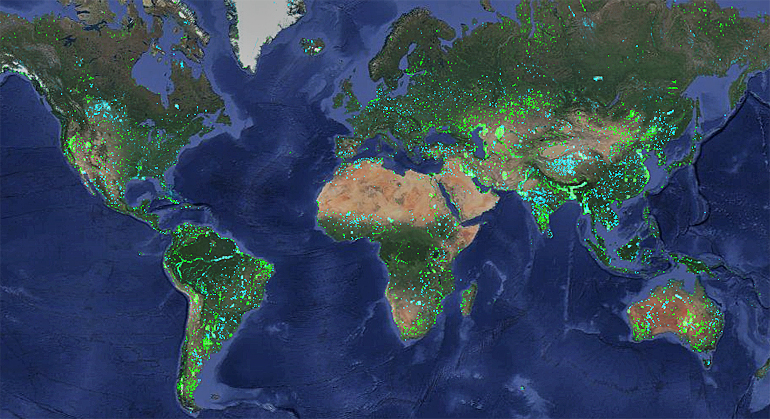 The world has gained 173,000 km2 of land over the past 30 years for reasons such as drying of lakes, sedimentations of rivers or man-made land reclamations.

At the same time an area of 115,000 km2 has been transformed into water for reasons such as sea level rise, changing meanders in rivers and construction of reservoirs for hydropower.

This has been revealed by Dutch research institute Deltares presenting their Aqua Monitor, an open tool that shows, with a 30-metre resolution, land and water changes around the globe (see map above: green dot is new land surface and blue is new water surface). 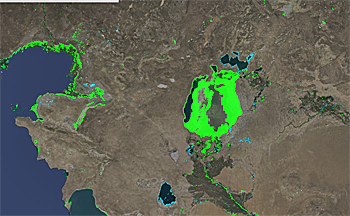 By far the biggest change from water to land over the past 30 years is Lake Aral that almost completely dried up because of irrigation to produce cotton and wheat.

Earth seems to get drier
The first global-scale tool that shows water and land conversion The Deltares Aqua Monitor was developed by Gennadii Donchyts, a remote sensing expert at Deltares.

Gennadii Donchyts: "The Aqua Monitor shows both documented and undocumented changes due to man-made interventions, natural variability, and climate change have now been revealed."

The tool shows an increase in land surface over the past 30 years.

Experts at Deltares were surprised as this indicates the earth is getting drier, compensating for the loss of land because of sea level rise and more extreme rainfall. 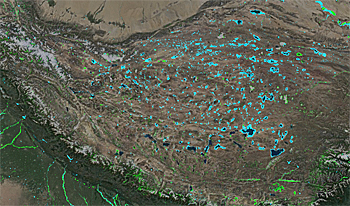 The monitor shows many blue dots on the Tibet plateau, indicating many new and or growing lakes. Experts at Deltares have no explanation for this change.

An example given is the reduced sedimentation in the Yangtze river as a result of the construction of the Three Gorges dam.

Unexpectedly this reduction has not led to a retreat of its downstream river delta, near Shanghai, so far. This contrasts with the Mississipi that is losing in losing its river delta, near New Orleans, to the sea.

Known versus unknown
While many countries report on dam construction, information about more remote or isolated areas has been lacking. In Myanmar, the Global Reservoir and Dams database shows an increase in the water surface between 1985 and 2010 of about 400 km2.

The same goes for the damming of the Rimjin River in North Korea close to the border with South Korea resulted in a storage surface of 12.4 km2 that was actually due to the Hwanggang Dam, which was thought to be located 35 km to the east.

Multiple applications
Jaap Kwadijk, the Deltares scientific director: "This has never been done before. So it is difficult to imagine all the new applications that will be made using this tool. But the tool can be used by everybody and so I am sure multiple applications will emerge in the next few years".