The new interactive data research facility iD-Lab at research institute Deltares has officially been opened by Andrew Steer, general director of the World Resources Institute on 23 March, in Delft, the Netherlands

The iD-Lab is a room with many large interactive screens that visualize water-related data from across the world, enabling decision-makers and experts to assess, visualize and simulate water problems and develop action plans.

On the occasion of the opening, Andrew Steer mentioned the importance of the iD-Lab for giving quick asses to big data. "There is a massive growing demand for these services. This lab will bring the best data to decision-makers so they will be able to make good decisions, planning for the future, and addressing current water crises", he said.

The high-level delegation of the World Resources Institute, that was holding its first annual board meeting outside the USA, was welcomed at the iD-Lab by Deltares director Maarten Smits (on top photo). 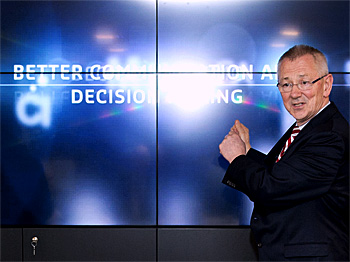 Real-time information service
The iD-Lab is at the forefront of innovative science and technology to combine and visualize big data to generate actionable information for particular users.

Data from real-time services, such a weather station and satellites, can be fed into models and visualized on large interactive screens.

Scientists and decision-makers can use this service to support their strategic planning, preparedness and response activities.

The new facility can also be used as an experimental arena for scientists to test and integrate their latest models and tools for new applications. 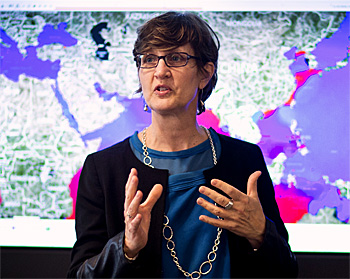 Betsy Otto of WRI announced the features of Flood Analyser 2.0 that will be relased early 2017.

Tailor made flood and drought warnings
Since 2014 Deltares and the World Resources Institute are working together on the WRI's Aqueduct flood analyser. This analyser can be found on the WR-website for flood-related information on almost 1,400 river catchments.

Global Director of the WRI Water Programme, Betsy Otto, explained what is so special about this flood analyser: “Flooding is one of the worst and most under-recognised disasters affecting people and their communities. River flooding alone causes over 100 billion US dollar in damage every year", Otto said.

She mentioned that better flood monitoring is essential to reduce these risks. "We want the best available data to help decision-makers. Our Flood Analyzer and the new iD-Lab give them better tools to understand risks and develop action plans to prevent damage and save lives. We’re excited about working with Deltares on these critical issues in the months ahead.”

It will be the first time this data will be matched on a global scale. 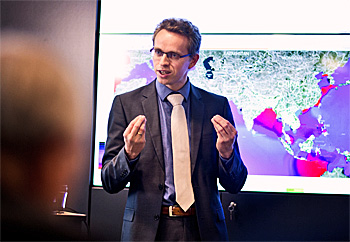 Senior reseacher Hessel Winsemius of Deltares explained the potential of the iD-Lab facility for real-time monitoring of rivers and coasts worldwide.

Real-time across the world
Senior researcher at Deltares, Hessel Winsemius, explained the potential of the new facility. "We gather here real-time data on the Rhine river. This river has many monitoring stations so we can quickly produce a visualization of its current status. We aim to increase our computer capacity to be able to retrieve more satellite data so we have the same ability for other rivers as well."

According to Winsemius social media can also be used as an information source to move forwards on flood preditions. "It is possible to harvest additional information from social media by tagging certain words. When these relate to a bankfull river stage is it easy to predict a flood."

This news item was originally published on the website of Deltares.
(photos: Guus Schoonewille)