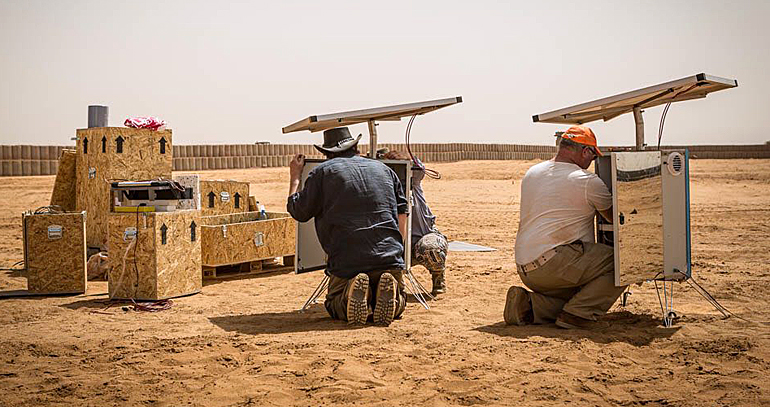 The Dutch Ministry of Defence invited teams of SunGlacier and The Hague University to its military camp in Mali, to test three new mobile water technologies under the extreme dry and hot weather conditions in the desert.

Most remarkable was the achievement by SunGlacier that harvested a small amount of water from the air by using a 3 Euro peltier cooling element from a computer. The field test was conducted at a temperature of 45 degree Celsius and an air humidity below 5 percent.

The other two technologies were a compressor to produce water from air and a compact device for the production of drinking water from rivers, lakes or pools. The collected water samples ate in the process of being analysed on the drinking water quality.

The teams returned last week and presented their results at a press conference in The Hague, the Netherlands, on 25 April. 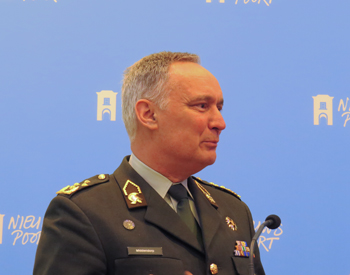 Commander of the Dutch armed forces, general Tom Middendorp told at the press conference that there were several good reasons to facilite the field tests.

Desert conditions
The Netherlands chief of defence, general Tom Middendorp, personally invited the two teams to do the field tests at the military camp near Goa, Mali.

According to Middendorp there were plenty of reasons for him to support these field tests under desert conditions. “Just image if there were small, inexpensive devices available that can produce drinking water all over the world.”

There is also an own interest, the general admitted, referring to the logistics of the military camp. “For our military camp in Mali we have to bring in large quantities of drinking water and these technologies can potentially make the camp more self-sufficient. By reducing the use of groundwater the camp has less impact on the water resources of the local people ”. 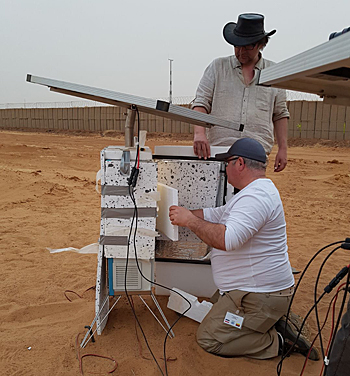 Below dew point
Two of the three new water technologies concerned the harvesting of water from the desert air. The challenge was to cool down the hot desert air to below the dew point.

SunGlacier has designed a solar-powered, water maker based on Peltier technology that operates without needing batteries or a current inverter.

A solar panel generates power for an 18W Peltier element, which cools a cone-shaped aluminium block to below the ambient dew point. The water condensates on the cone and drips down.

This device can generate only small quantities of water, and the SunGlacier team took the opportunity to also test its Desert Twin system using solar-driven compressor.

Potentially this technology can produce water from desert air in larger quantities.

Initially it proved to be too hot for the system to produce water from the air, but eventually the SunGlacier team managed to cool down the air inside the device to below the dew point. 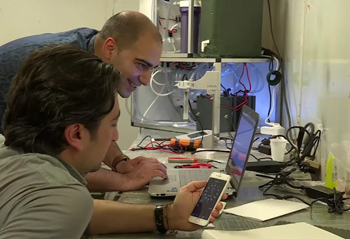 Engineers Damon Golriz (front) and Emad Khatibzadeh analysing the results of the EDI treatment of the river water.

Treatment of river water
The third technology involved, was on the treatment of water from the nearby Niger river. Engineers for peace Emad Khatibzadeh and Damopn Golriz, had the opportunity to test the latest version of the desalination system based on a combination of electrodeionization (EDI) technology and UV filtration.

In close cooperation with the Hague University, this new desalination device is being developed to provide cheap drinking water or irrigation water in remote areas with no electricity grid.

A prototype has already produced 20 litres in an hour, using as little as 200 Watt input from a solar panel. In Mali a version has been tested with new components.

The Hague University
Research platform on good governance
The Hague, the Netherlands
+31 70 445 8888
www.thehagueuniversity.com/research

Video impression of the field test on the Facebook page of the Dutch ministry of Defence. 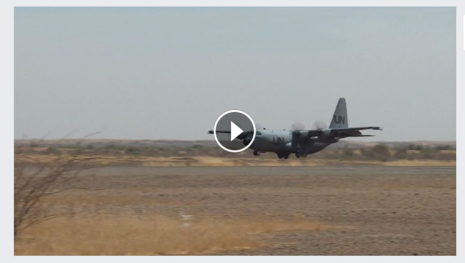