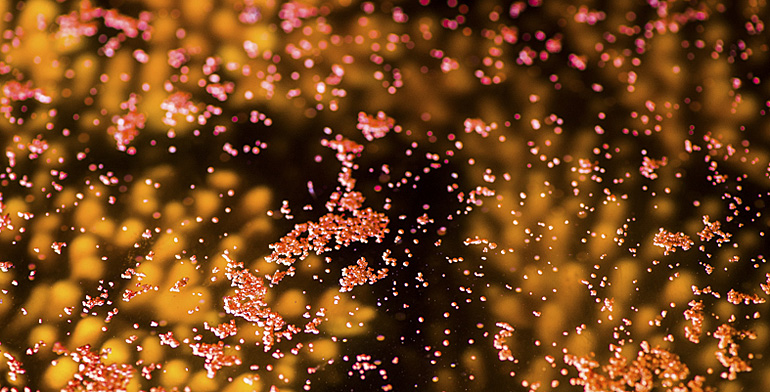 At some time following the full moon in November there is a single moment that all the coral releases eggs, the coral spawning. The researchers want to be there when the spawning takes place, to collect the floating clouds of eggs and bring them to places where the reef needs to grow. 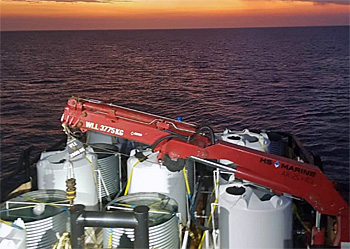 Ship with pumps and tanks on its way to the spawning area (TU Delft/Instagram).

Fragile coral eggs
Working with coral larvae has been tried and tested on a small scale and in special tanks. The researchers will now be investigating on location whether this process can be upscaled by collecting the fragile coral eggs on a much larger scale, using adapted pumping installations that can be used on dredgers for example.

Aerial surveillance
Shortly after the spawning, the eggs float to the water surface where they accumulate depending on the current. The researchers locate these floating clouds of eggs from the air using a small aircraft.

"It's an exciting proces", says Professor Mark van Koningsveld from TU Delft, "because we then have to get to the eggs really quickly by boat, containing our pumping and research equipment, so we can do our tests; the next opportunity to test this process in the wild isn't for another 12 months, when the coral spawns again." 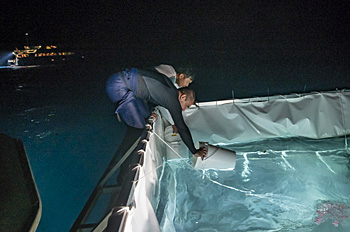 Optimise pump systems
It is important that the fragile eggs are still alive when they reach the storage tank. To make their journey as smooth and safe as possible, TU Delft’s and Van Oord’s researchers have spent the past few months optimising the pumping systems.

For example, the pump needs to cause no eddies during suction and has to stay floating on the surface of the water. Also, the type of pump turned out to play an important part in the design.

During lab tests in the Netherlands, alternatives were used to mimic the structure of coral eggs as closely as possible, such as fish spawn, peas, blueberries and little balls of gel.

The research project is subsidised by the Australian and Queensland Governments and is part of the Advance Queensland SBIR initiative.

Video of spawning of coral in a tank.

Test of underwater pump system with coloured balls of gel.