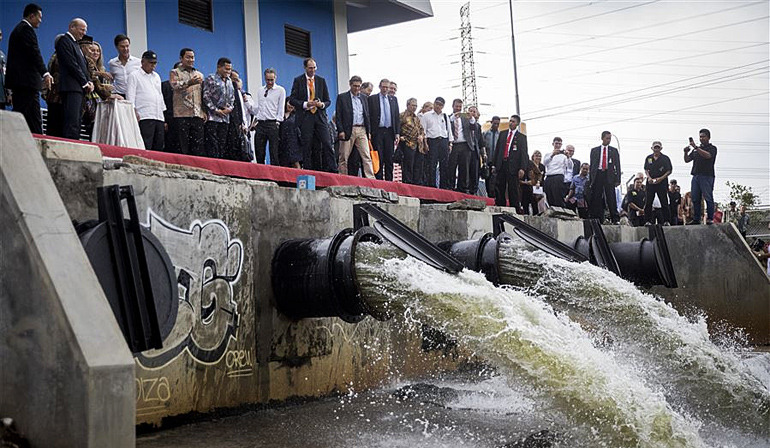 The Banger polder protects 84.000 people in the low lying parts of the city from the regular floods.

The ceremony took place on 23 November and was also attended by Indonesian Minister Mochamad Basoeki Hadimoeljono of Public works and housing, Mayor Hendrar Prihadi of Semarang, Dutch Minister Melanie Schultz-Van Haegen of Infrastructure and the Environment and representative of the Dutch Regional water authorities Hans Oosters. 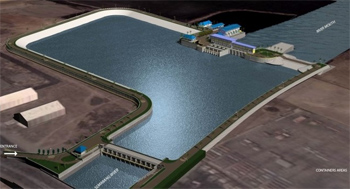 Impression of the whole complex with the drainage channel (left), storage facility, pumping station and outfall channel (right) to the sea.

Banger polder
Dutch regional water authority Schieland and the Krimpenerwaard and the city of Semarang has spent the last nine years to realize a 570 ha polder at the mouth of the Banger river with a drainage channel and an outfall pumping station.

The reason for the Dutch-Indonesian cooperation is the regular flooding in the low-lying districts of Semarang on the island of Java.

Polder board
The cooperation also included the assistance in setting up a polder board based on the Dutch model. This includes the collection of a small fee for the maintenance of the infrastructure. The board is also tasked to keep the drainage canals clean from garbage.

The board consists of eight people, including three residents of the area, three professors and two people from the government.

The technical design was done by Dutch consultancy firm Witteveen + Bos, financed by the Dutch programme Partners for Water.

The institutional part of the project was managed by Regional Water authority Schieland and the Krimpenerwaard and was financed by VNG international and the NWB-Waterfund.

This news item is based on an original publication on the website of the Dutch Water Authorities (Dutch only).

Report of the ceremony by Indonesian news station Tribun Jateng.