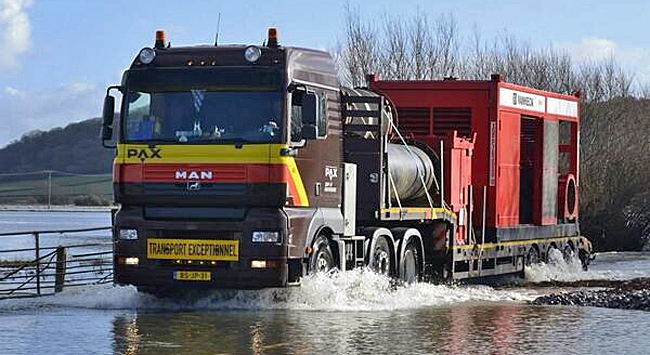 Dutch pump company Van Heck started operating five huge mobile pumps to remove the flood waters from the Somerset Levels. The pumps, together with the supporting equipment such as pipes, were brought in from the Netherlands on 21 trailers on 7 February.

The pumps have a capacity of over 6,000 m3/h to pump out the flood waters from the King's Sedgemoor drainage canal into the Parret river, just north of the town of Bridgwater. 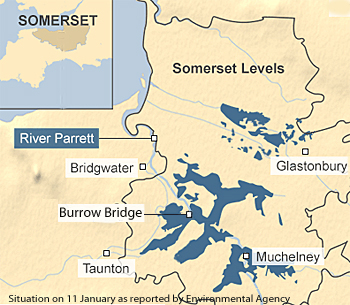 At several regular pumping stations the capacity has increased with over 50 percent.

However, the Environmental Agency has not been able to pump out all flood waters, partially because of the high water levels on the Parrett river that discharges the water to the sea.

After his visit to the flooded area prime minister David Cameron promised additional pumping capacity. The river Parrett has more capacity now to support that.

All Dutch pumps will be located at two bottlenecks of the King's Sedgemoor and the Sowy River drainage canals.

Last summer Van Heck assisted the German authorities with its mobile pumps when the banks of the river Elbe overflowed.

About Van Heck
Van Heck is an internationally operating company in the field of water control and displacement (with offices in the Netherlands and Singapore). The Van Heck organisation is especially often called in to manage temporary redirections and disasters, and to implement emergency solutions.

On 27 January BBC broadcasted a report on Northmoor pumping station, just north of Burrow Bridge, where mobile pumps are used to pump flood water in the river Parrett.