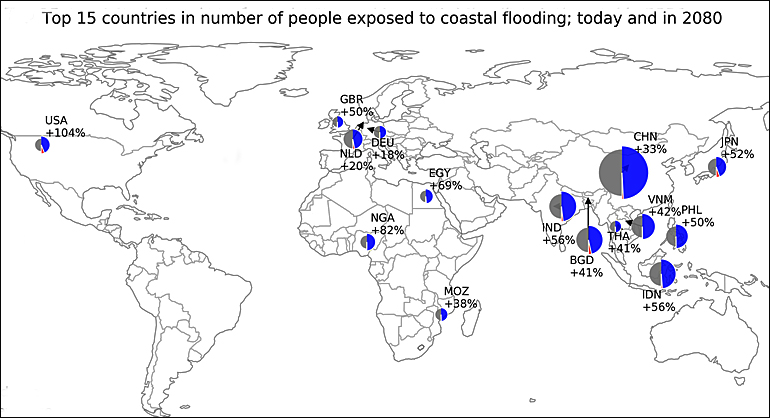 The combination of land subsidence and sea-level rise will increase the coastal flood prone zones in the world and increase the number of people exposed to the risk of flooding by 20 million in 2080.

Researchers Dirk Eilander of Deltares and Philip Ward of VU University Amsterdam presented this outcome of their study at the annual assembly of European Geosciences Union in Vienna, Austria, on 25 April.

Eilander and Ward studied the risk of flooding on all coasts throughout the world until the end of this century. For this they extended the Aqueduct global flood analyser tool that now also includes data on coasts and seawater level. 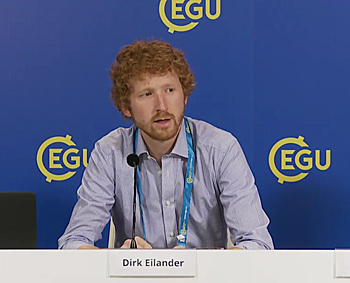 Reseacher Dirk Eilander at Deltares presenting the results of the study at the press conference in Vienna.

Eilander and Ward teamed up with other researchers to extend the use of this platform to include coastal flooding and integrate data about changes in seawater levels, as well as global land subsidence in combination with the probabilities of spring tides.

According to Dirk Eilander the new figures provide a good picture of where risk levels are highest around the world. “Although some large countries stand out in absolute numbers, the generally smaller island states will be affected most in relative terms”, he added.

The geographical data and elevation data for the coastal areas have been entered accurately in the models used, taking into account steep or gentle slopes and local vegetation.

Buildings and population densities on the coasts were used to map out flood impacts.

The extended Aqueduct tool will make it easier for coastal populations to understand their flood risk and how it might change in the future.

Concentration in four countries
Ten percent of the world's population live in low-lying areas less than ten metres above sea level. Many of these areas are at risk of flooding.

The expectation is that, as a result of sea-level rise and land subsidence, 50 percent more people could be affected in 2080 by severe floods that occur once every hundred years.

Population growth and migration have not been included in this estimate.

The extension of the Aqueduct platform has not quite been completed yet. The platform will be made available to the general public this year.

Recording of full press conference on water hazards at EGU2017.