Car drivers that enter the road on the closure dam Afsluitdijk at night, are welcomed by sculptures that reflect in their car lights. The fairylike reflection lights have been designed by Dutch artist and innovator Daan Roosegaarde and outline the monumental square constructions of the flood gates on each side of the road.

The line shaped design fits the iconic nature of the 32-kilomter straight dam that protects the Netherlands against floods since 1933. Car drivers can see the light sculptures each night till 21 January. 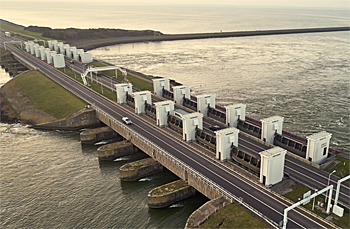 The flood gates at the entrance of the 32 km long straigth closure dam in daylight.

New icon
For the occasion of the ‘Gates of Light’ exhibition the studio of Daan Roosegaarde has impregnated the flood gates with a new retro-reflective material that glows in the headlights of oncoming cars.

The flood gates have recently been restored as part of overall programme for upgrading the whole closure dam.

The Dutch government has embarked on a 850 million euro reinforcement plan to make the Afsluitdijk a new icon of Dutch flood protection. 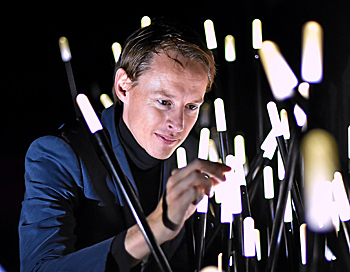 Artist and innovator Daan Roosegaarde is specialised in light art.

The owner of the dam, the national public work agency Rijkswaterstaat, wants to make the dam energy neutral.

Already existing energy supply stations along the dam that generate power, are an array of tidal turbines and a Blue energy pilot plant that generates electricity from the difference in salt concentrations between the fresh water on one side of the dam and the salt sea water on the other side. A plan for a 6,5 MW solar station is being studied.

A real novelty for the new Afsluitdijk will be a 5 km long artificial fish passage to allow migration between the Wadden Sea and IJssel Lake.

This news item is based on the original publication on the website of Studio Roosegaarde.

Video presentation of the 'Gates of light' exhibition.