Yes, it can! Researchers of the Floating Food Farm harvested their first vegetables from a small-scale test island on 7 September. A special prepared meal with the hydroponic grown vegetables tasted well, according to the researchers.

In mid-May two small-scale test islands, made of expanded polystyrene (EPS - airpop), were launched by the Floating Islands foundation, in partnership with the Wageningen University & Research Science Shop.

The researchers started preparations for a follow-on experiment at a larger scale on open surface water. 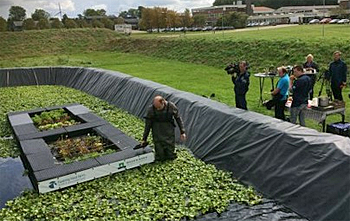 Soil exhaustion
The experiment responses to the prediction that the growing world population, soil exhaustion and climate change will result in a shortage of 22 million square kilometres of arable land by 2050.

Yet, 70 percent of the Earth's surface is water and it is here that we need to look for new opportunities and solutions.

An additional reason to conduct the experiment is the fact that in large cities such as Singapore, tomatoes are exorbitantly expensive. This type of urban vegetable farming can bring relief.

Valuable lessons
The first test showed which vegetables grow well in hydroponic conditions where others develop roots as a result of a lack of oxygen.

According to project researcher Marcel Vijn at Wageningen University, other valuable lessons were learned. ‘Shortly before the harvest, a part of the crop appeared to have been eaten by ducks. So, do we may need to use something like duck deterrents in the future?’ he hinted. 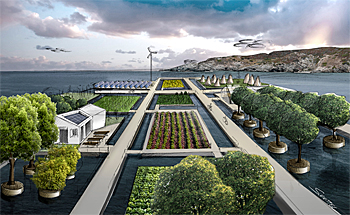 Impression large scale food production on water as envisioned by the researchers.

Exciting combination
The experiment combines the hydroponic growing of food, the care and experience of food and the floating aspects.

According to Sören Knittel, industrial designer of the island, Nexus Product Design, ‘It is this very combination that makes this project so exciting.’

‘We still need to answer questions such as the effect of high factor winds and wave action on open water on floating farms, while also considering any additional dangers to crops on water’, Knittel said.

The project will be finalised on 10 November and the new plans will be presented.