On invitation by the Environment Agency, Dutch and British flood experts exchanged ideas for more collaboration on innovation in the area of flood and coastal erosion risk management (FCRM).

The exchange took place during a well-attended workshop as part of the Flood & Coast 2016 conference in Telford, UK on 24 February. 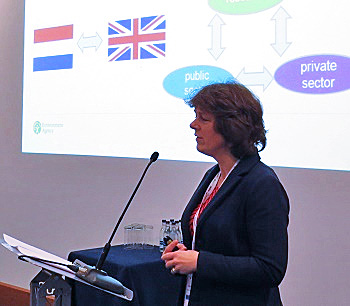 Alison Baptiste of the Environment Agency mentioned the long tradition of the UK and the Netherlands working together on flood prevention.

Broaden up cooperation
Opening the workshop director strategy & investment Alison Baptiste of the Environment Agency mentioned the existing cooperation between the Dutch and British flood authorities, such as the I-Storm network on storm surge barriers including the Thames barrier in London and the Maeslantkering in Rotterdam. Baptiste hoped for the UK-NL cooperation to broaden up to other areas of flood risk management.

The workshop concentrated on asset resiliency and community involvement.

“There is a political will in England to look and test our thinking on flood risk”, said acting executive director of FCRM John Curtin of the Environment Agency. "We hope you can do more than sending pumps and advising us after each new flood event."

In the Netherlands there are changes in the air too. The government is in the process of introducing the multilayer approach that is based on flood risk reduction. Dutch flood prevention has always been about building levees, dams and barriers.

The new multilayer approach means that, next to flood defences, it is also possible to reduce flood risk by creating flood resilient infrastructure and the introduction of emergency response. 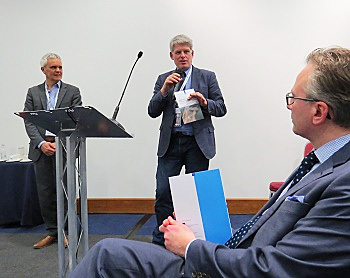 From left to right: workshop facilitator Rob Bonte of Royal HaskoningDHV, Hans Pietersen of Rijkswaterstaat and John Curtin of the Environment Agency.

From typical wind mill to steam engine
To set the scene on innovation, Hans Pietersen of the Dutch national water authority Rijkswaterstaat told the anecdote of the drainage of a large lake near Amsterdam in the 19th century.

The idea was to do the job by building a cascade of wind mills as the Dutch had done before.

However during a visit to the UK the Dutch king William I saw the steam engines that were used to drain coal mines. The king took a bold decision to opt for innovation.

For the at that time very innovative Cruquius pumping station the largest Watt-design reciprocal stroke steam engine ever build was ordered in the UK. 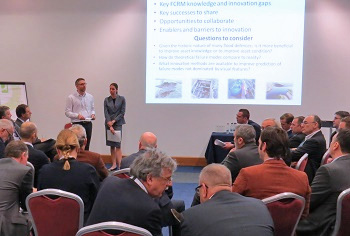 Over 80 Dutch and UK flood experts joined the workshop on more collaboration.

Organising chaos
The workshop showed that in both countries a large mix of agencies, research centres and companies are involved, nourishing good ideas and develop them into real innovations.

The Dutch participants mentioned their 'golden triangle' as a successful approach for government, knowledge institutes and companies to cooperate on innovation. In a way this is how innovation works in the UK as well, but it is not mentioned as such.

“It is about organising chaos”, summarized workshop facilitator Rob Bonte of Royal HaskoningDHV. He articulated the prevailing option to be restrained in formal structures as that may kill the creativity.

According to Bonte the workshop helped to bridge some of the fundamental differences between flood management in the UK and the Netherlands. "The geographical conditions are so fundamentally different that it is difficult to share ideas and insights. This workshop created a better understanding of these differences".

During the workshop it was also raised that the Environment Agency and Rijkswaterstaat are not the only flood authorities that struggle with these issues. Therefore it was suggested to raise the initiative for international collaboration on innovation to the level of operationalising the European flood directive.