The new UK branch of Royal Smals launched its Baleen system in the UK during the Flood & Coast 2016 conference and exhibition. The Baleen system is a special developed dewatering technology for dredging sludge in geotextile dewatering tubes.

Royal Smals showed the Baleen system for the reuse of dredging sludge to reinforce levees.

The Flood & Coast 2016 conference and exhibition takes place in Telford, UK from 23 – 25 February.

New branche in the UK
At the booth of Royal Smals Paul Costigan (on top photo) presents the model of the Baleen system as presently used for a levee reinforcement work in the Netherlands.

Four months ago Paul Costigan became co-owner and director of Smals Dredging UK, the new branch of Royal Smals in the UK. He is very convinced of the potential of the new enterprise. “We fill a niche market for small dredging projects in channels and reservoirs, next to the big dredgers”, Costigan explains. “Relying on the knowledge of 80 experts and the availability 20 small and medium scale dredging vessels in the Netherlands, I am convinced we can build a successful branch here in the UK.” 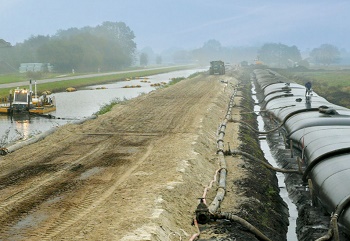 Costigan: “With Baleen we offer a possibility to store the material temporarily in geotextile dewatering tubes till it has dewatered. Once stabilised it is possible to use the material in new constructions”.

Smals Dredging UK is about to start its first project at a sewage treatment plant. The plant will be upgraded and some former dumping sites for sewage sludge need to be cleaned up first.

Impression of the levee reinforcement project by Royal Smals in Slochteren, the Netherlands.