Key stakeholders of the professional UK flood defence community gathered this morning at the Flood & Coast 2016 conference in Telford, UK.

The conference takes place only two months after the record rainfall and river levels in December when three big storms passed the United Kingdom very shortly after each other.

Existing flood defence schemes do not seem to hold when the exceptional rainfall becomes the standard due to climate change. Long term strategies shall have to be revised if this is the case. However, so short after the December storms there is still much uncertainty about the ‘new’ standard of rainfall. 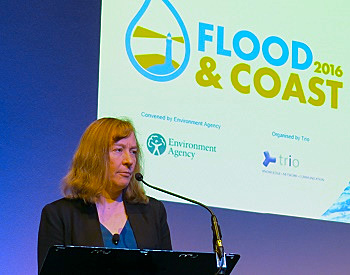 Early days for re-thinking
The opening session of the conference made clear it is still too early to identify all lessons learned. In her opening speech director general Sonia Phippard of the Department for environment, food and rural affairs (Defra) announced a new 25 years environmental plan to be published later this year.

“We must make it happen now. We need a strategy that brings win-win solutions and combine living quality and flood protection”, she remarked.

According to Phippard a catchment-landscape based approach is vital. 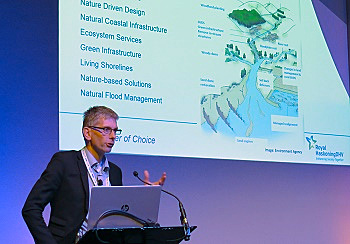 Jaap Flikweert of Royal HaskoningDHV introduced the concept of Building with Nature that is very popular in the Netherlands.

Bring in the Dutch
Jaap Flikweert of Dutch consultancy Royal HaskoningDHV talked about the option to use sand scaping as an innovative way of beach nourishment. Flikweert showed pictures of the Zandmotor along the Dutch coast where this technique has been applied to strengthen the coastal flood defence.

In his speech Flikweert could not leave unmentioned the slogan ‘bring in the Dutch’. He warned that big solutions may work in the Netherlands, but not necessarily in the UK. “A different context, needs a different approach”, said Flikweert.

Yet, he hoped that the Dutch approach can be inspirational. “Everyone is working together to solve a national problem.”