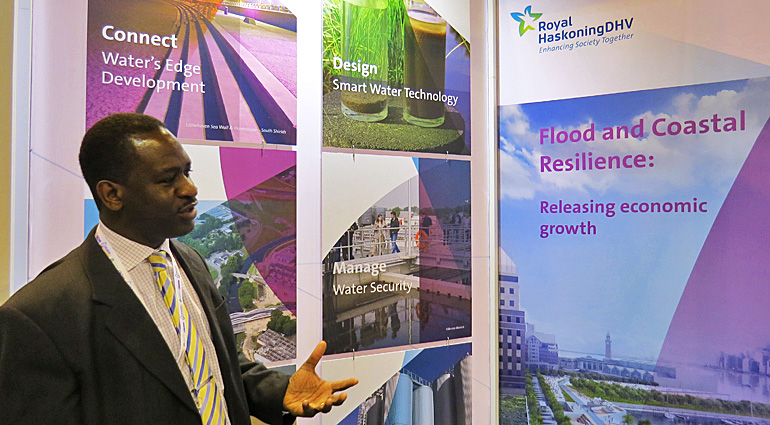 “Do not mix the regular uncertainties about wave runup, surface runoff or other hydrological design criteria, with the uncertainty about climate change”, advised Fola Ogunyoye, technical director at Royal HaskoningDHV in his contribution to the Flood & Coast 2016 conference in Telford on 23 February.

Fola Ogunyoye had titled his contribution 'managing the known unknowns and the unknown unknowns'. He focused on the issue of the freeboard as residual uncertainty allowance in a flood scheme design to address known uncertainties.

This can include hydrological uncertainties, allowing to make a levee higher or stronger, or take actions to reduce the water levels or waves.

According to Ogunyoye there has been inconsistencies and sometimes double-counting in the past with how to treat climate change impacts in terms of freeboard.

“If you design your flood scheme today, you use freeboard to account for the residual uncertainties of today. Not to address future changes”, he said. 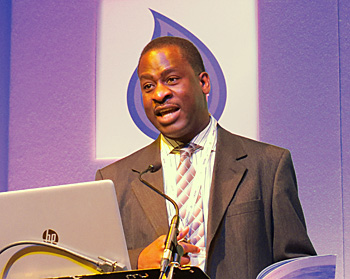 Fola Ogunyoye, technical director at Royal HaskoningDHV linking the known and unknown unknows to the design of a flood scheme.

Uncertainty about return periods
Most flood schemes in the UK are designed for weather events with a return period between 1:20 and 1:100 years. But due to the extreme rainfall in the past two winters, doubt has risen over the pace of climate change.

Uncertainty has risen about the return period of very extreme rainfall that exceed the design criteria. Has the very extreme, already become the standard of today? It is tempting to use the freeboard, based on hydrological uncertainties, also to address the uncertainties about climate change

However, as Ogunyoye pointed out, by adding up all the uncertainties, a flood wall that would normally be designed at 1,5 m, can easily end up twice as high.

Try to capture the uncertainties
“Try to understand better the uncertainties that have a large effect on the design and try to reduce this, where appropriate, by collecting more data”, Ogunyoye advised.

As an example he mentioned the typographic characteristics in a landscape. “Your information may be too general. It may be wise to spend some money on more detailed information to feed your models. Try to capture the larger uncertainties", he suggested. 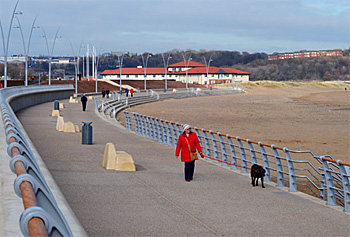 In Littlehaven, UK, RoyalHaskoningDHV designed a new sea wall scheme that combined an appealing promenade and a raised beach.

More flexible designs
The use of the freeboard is not the best way to deal with the uncertainties about climate change, according to Ogunyoye.

"These uncertainties you can address by making the design more flexible. It is possible to design a flood wall in such a way that it can overtop without causing damage.

Another option is to look at the consequences of an extreme event and incorporate, for instance community resilience".

Smarter design of flood schemes
Ogunyoye advocated smarter designs of flood schemes. "There is always the possibility of an event that exceeds the design criteria. So why not give it a place in the design. It makes such an event better manageable and it gives local authorities and community a better fighting chance."

Often communities do not want a higher flood wall, so Ogunyoye can image that more retention is a good alternative.

"A one-time investment in a new scheme for the next 100 years is crazy", Ogunyoye concluded. "A good scheme needs to be resilient and flexible. It is a process. That is why flood management needs to be integrated with spatial planning. The protection goes as far as the aspiration of the community".