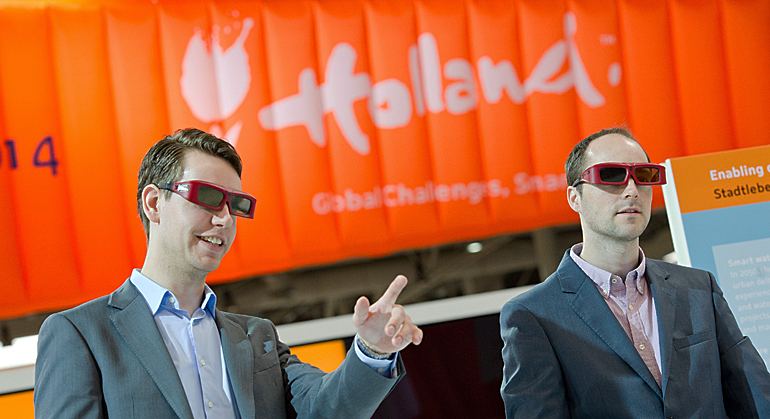 This year the Netherlands is chosen as official partner country. 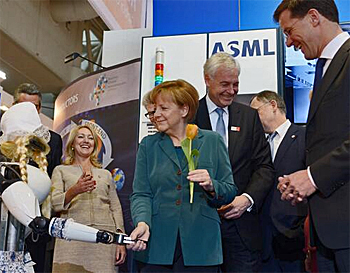 Germany's Chancellor Angela Merkel (middle) is presented a tulip by a robot, in the presence of  Dutch prime minister Mark Rutte (right).

3D-glasses at Dutch pavilion
Showy at the Holland Pavilion is the presence of Nelen & Schuurmans where everybody wears 3D glasses. Nelen & Schuurmans is a leading Dutch company in the development of new ICT tools for flood prevention.

At the Hannover Messe Nelen & Schuurmans shows a new cloud-based 3D modelling programme that can simulate the effects of a rainstorm or a levee breach, storm surge or a water-main break. The programme has recently been developed by the 3Di consortium - including Deltares, Delft University of Technology and Nelen & Schuurmans - to precisely calculate and visualize flood risks.

Latest simulation technology
The 3Di flood simulation is based on the latest computer technology that makes the hydraulic calculations 1,000 times faster and has an accuracy to the inch. With 3Di it is possible to simulate the consequences of a cloud burst or a levee breach. Very realistically it shows where the flooding starts and how it progresses.

3Di is develop for a variety of end users, from water experts, to spatial planners, disaster specialists and policy makers. Launching customers are the two Dutch water boards of Delft and Hollands Noorderkwartier.

3Di has been developed by Deltares, Nelen & Schuurmans and Delft University of Technology, each having a specific role in coming up with new concepts and developing and testing prototypes within 3Di case studies.

Impression of Day one of the Hannover Messe 2014 (7 April)