The Indonesian and Dutch government launched a five-year public-private partnership initiative for enhancing coastal safety at the North Coast of Java.

The initiative aims to build stable coastlines with reduced erosion risk through integration of mangrove restoration, small scale hard-engineering and sustainable land use.

The project budget is 5 million euro, financed by the Dutch Sustainable Water Fund. 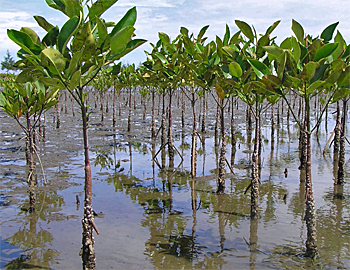 Official launch
The initiative was launched in Jakarta on 3 March by the Secretary General of the Ministry of Marine Affairs and Fisheries (MMAF), the Secretary of Central Java Province, and the Director of River and Coasts from Ministry of Public Works and Human Housing (PU) and the Dutch Ecoshape Consortium.

Dams of brush wood
It will focus on the most affected coastline in Demak district and is the follow-up of a successful pilot that finished in 2014.

The partners will construct a 9 kilometer strip of permeable dams made of brush wood and 300,000 m3 sediment nourishment to trap silt, regain lost land along this eroding coast and support rehabilitation of 90 hectares of mangrove buffer.

In parallel, the initiative will introduce sustainable aquaculture along the shoreline and support income diversification. This will lead to the transition from a mangrove-conversion model to a mangrove-based economic model. 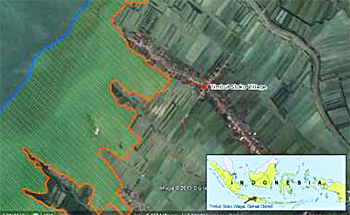 In some places more than 3 kilometers of land has already been taken by the sea and entire villages have been engulfed. Many people experience a major loss in income, reaching up to 60-80% in some villages.

About Building with Nature
The new Dutch-Indonesian initiative will be a leading international case of the Dutch programme Building with Nature for the development of new coastal engineering approaches, using natural protection by ecosystems like mangroves and salt marsh habitats.

In the Netherlands 'Building with nature' represents the transition of traditional infrastructure designs that typically fight against nature, towards more cost-effective solutions that work with and alongside nature.

The program is administered, represented and carried out by Ecoshape, a foundation by law.

This news item was originally published on the website of Deltares, Ecoshape and Wetlands International.