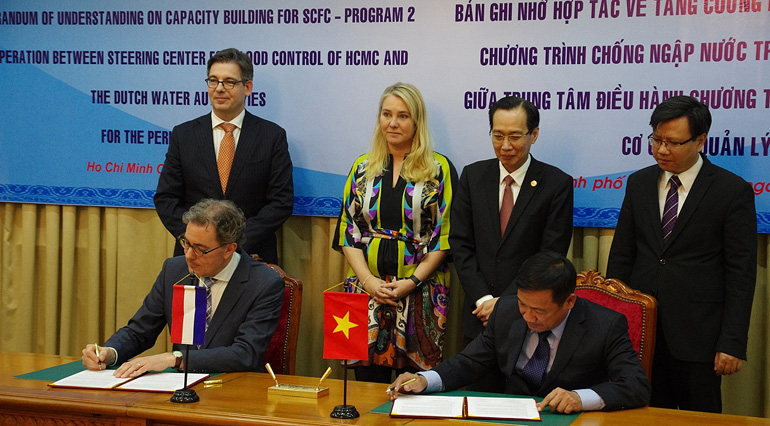 Ho Chi Minh city's Steering Center for Flood Control (SCFC) and the Dutch water authorities have agreed on a series of joint workshops on urban drainage. During the workshops Vietnamese drainage experts will work on real cases, together with their peers from Dutch water boards.

This ensures that the workshops will be very hands-on and combine Dutch and Vietnamese experiences on urban drainage.

Vice-president Stefan Kuks of the Association of Dutch water authorities (DWA) and director Nguyen Ngoc Cong of the Steering Center of the urban flood control program Ho Chi Minh City (SCFC) come to an initial agreement and signed a Memorandum of understanding on 23 March.

The signing ceremony was part of a meeting with the People's Committtee Ho Chi Minh City that was joined by Dutch minister Melanie Schultz van Haegen of Infrastructure and the environment. 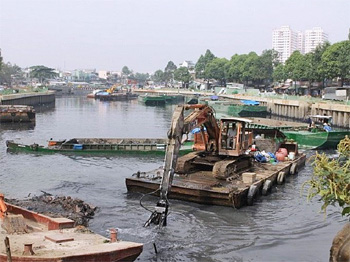 Dredging on one of the many drainage channels in Ho Chi Minh city.

Learning on the job
On the occasion of the signing ceremony Stefan Kuks said: "I am very pleased with the new partnership agreement. The water challenges are big and collaboration between universities, industry and government is crucial."

Kuks mentioned the urgency to adverse the negative effects of climate change. "A lot is happening, both in the Netherlands and in Vietnam. The successful cooperation in Ho Chi Minh City is an excellent example. We can learn from each other." 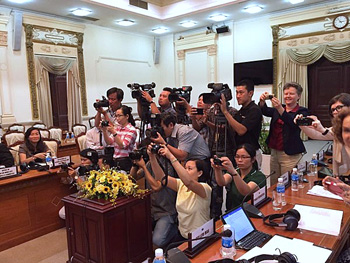 A lote of media attention for the signing of the memorandum of understanding by SCFC and DWA.

This cooperation is to be continued with the new series of 'learning on the job' workshops.

Subjects are for example structural management and maintenance, and innovative forms of public-private partnerships.

Vietnamese drainage experts can learn from the longstanding experiences in the Netherlands.

Then again, Dutch drainage experts can learn to cope with extreme weather events. Vietnam already suffers from such events and in the Netherlands they are predicted to happen due to climate change.

This news item was originally published on the websites of the Association of Dutch water authorities and regional water authority Vechtstromen (in Dutch only).