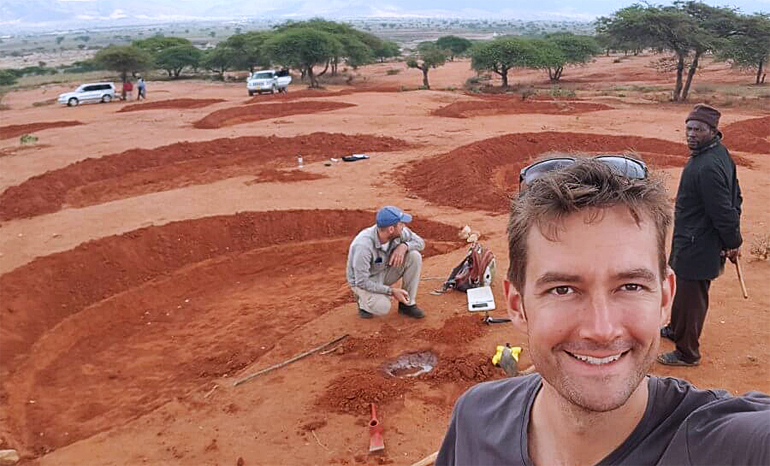 Foundation Justdiggit has trained 10 local technicians from Pembamoto, Tanzania, on how to dig half moon shaped soil bunds to prevent soil erosion and improve water availability for plants.

The technicians were trained to use a spirit level instrument to lay out the bunds and place them on the contour lines.

In his blog, Sander de Haas (on top selfie), Chief Technology Officer at Justdiggit, writes about the training that he conducted together with Francesco Sambalinbo of MetaMeta. 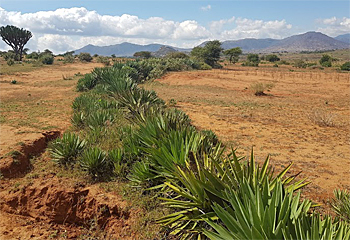 Plants (Agave/Sisal or Euphorbia) hold the soil and break the force of water. Sediments can build up behind.

One of measures Justdiggit uses to catch the rainwater, is by digging half moon pits in the ground (bunds).

According to De Haas the trainees understood the instruments quite quickly and managed to properly position the bunds. A normal bund has a diameter of 5 meter and they are spaced 5 meters apart.

“We also trained them how to deal with exceptions, like when there is a gully at the place where you want to dig a bund. Sometimes you need to place them a bit closer to each other, make them a bit smaller, bigger or skip a bund completely”, De Haas explains. 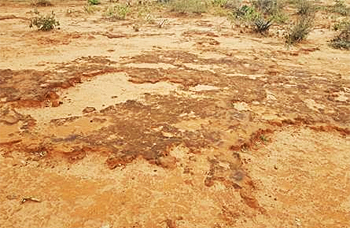 Clearly visible in some places was the formation of a biological soil crust that slows down the infiltration of rainwater.

Soil testing
Another important element of the training was the soil testing. The water infiltration should be not too fast and not too slow. The presence of a crust on the soil makes a big difference, De Haas writes: “The test showed that the infiltration rate on a crust is about 10 times slower than when the crust was removed.”

Exploring the area
De Haas and Sambalinbo took the opportunity to explore the area to determine where to dig more bunds. It turned out that the soil was either too rocky or had too many gullies to dig bunds in between.

De Haas: “In total we estimate that about 15 percent of the 400 ha area is suitable for bunds. For other areas you could do something else, such as stone lines, like in Kenya. Or vegetative lines like they use in the area to fence off agricultural plots.”

The findings have been discussed with the community in Pembamoto and will be further explored.

Read the full blog by Sander de Haas on the website of Justdiggit.