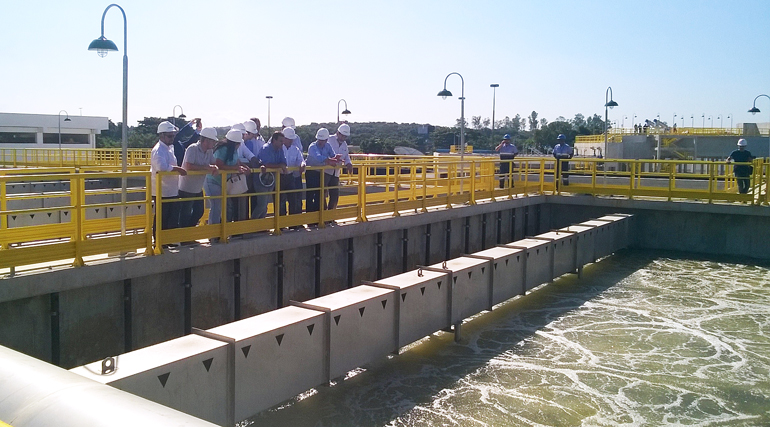 The plant is located next to one of the four main locations where the Rio 2016 Olympic Games will take place from 5 till 21 August.

The new Nereda plant is owned and operated by Foz Águas 5 and will also treat, next to the waste water from the sport facilities at the Deodoro Olympic venue, the wastewater of 480,000 people in this district.

The capacity of the existing wwtp has been increased 10 times, meaning that less untreated sewage water will end up in the Guanabara Bay where the Olympic sailing events will be held. 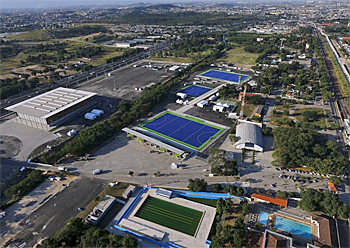 Aerial view of Rio's Deodoro Olympic park with the blue hockey field and the wwtp at the far end.

Up to 35 percent people connected
Foz Águas 5 is a partnership of Grupo Águas do Brasil and Foz do Brasil, that started a 640 million Brazilian Real (164 million euro) project in 2012 to expand its sewage system, including the construction of 376 km of network, 12 lifts, a new wastewater treatment plant (wwtp) in Bangu and the expansion of wwtp Deodoro.

Excellent cost benefit ratio
The Nereda plant has been built by the Brazilian engineering firm Odebrecht Ambiental, one of the shareholders of Foz Águas 5.

On the occasion of the startup, Engineering manager Giancarlo Ronconi at Odebrecht Ambiental: "We are true believers regarding Nereda technology – as a matter of fact we understand that we are developing in conjunction with Royal HaskoningDHV, a breakthrough solution for large WWTP with high process efficiency and excellent cost benefit ratio".

Bay cleanup plan
The Guanabara Bay and Lagoa Rodrigo de Freitas, where during the Olympics the sailing and rowing championships will be held, are confronted with several environmental issues, such as water plants, algae, fish deaths and liquid and solid waste runoff.

A special consortium Clean Urban Delta Initiative of the Dutch government, non-governmental organisations and businesses has proposed a cleanup plan, but cash-strapped Brazil has not enough money. 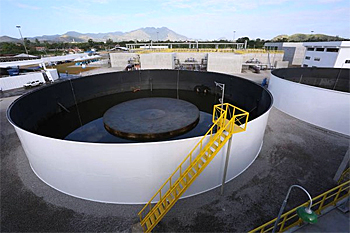 One of Nereda's SBR-reactor at wwtp Deodoro in Rio de Janeiro.

More plants to follow
João Almeida, Director quality, water products and innovation at Royal HaskoningDHV said: "The Deodoro Nereda plant is not only a landmark project for its impressive capacity, but also for the actual contribution to the whole region of Rio de Janeiro."

With an additional Nereda plant in Jardim Novo, Rio Claro under construction and several more plants under design in São Paulo and Recife, Almeida is looking forward to bring the energy efficient water technology to other regions in Brazil.

About Nereda
Nereda is technology that treats wastewater with less energy (20-30 percent), chemicals and costs and a smaller footprint than conventional water treatment systems (up to a factor 4 smaller).
Nereda treats wastewater with the unique features of so-called aerobic granular biomass: purifying bacteria that create compact granules with superb settling properties.

What have Rio's Zona Oeste and the Netherlands more in common than good football…..